The High Numbers - The Who before they became THE WHO... 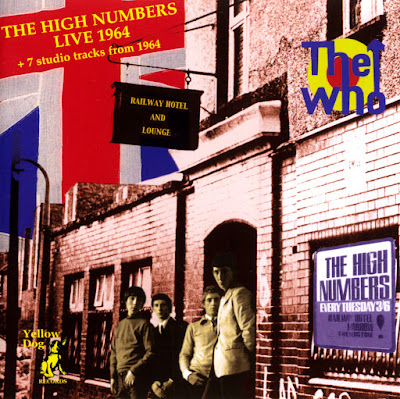 The High Numbers was a short-lived alternate name used by The Who at the outset of their career. The name change occurred at the behest of music publicist Peter Meaden, who wanted to make them known as a mod band. "High numbers" was a reference to T-shirts with number designs, a coveted mod fashion item at the time. The band consisted of the same line-up as The Who: Roger Daltrey (vocals), Pete Townshend (guitar), John Entwistle (bass), and Keith Moon (drums). After their first single failed to chart, they reverted to The Who.

For just a few months in 1964 (approximately July to October), the Who changed their name to the High Numbers, releasing one single under that billing before reverting to the more inventive and appropriate "the Who." The name change resulted from their association with Pete Meaden, a mod who briefly managed them in mid-1964 (Helmut Gorden was also involved in their management with Meaden for much of that time). Meaden was instrumental in getting the band to gear their music and image more toward the mod movement, and this was reflected in his choice of the name "the High Numbers," which arose from mod slang.

The High Numbers did a single for Fontana in July, "I'm the Face"/"Zoot Suit." Both sides of the 45 were written by Meaden, the A-side loosely adapted from Slim Harpo's "Got Love If You Want It," a popular cover choice among British bands of the time (including the Kinks and the Yardbirds). The flipside is often said to be similarly based on "Country Fool," an obscure New Orleans R&B number by the Showmen, although the resemblance to a previous song is not as blatant as it is with "I'm the Face." The lyrics, too, were rather blunt pastiches of mod jargon and sloganeering. Relatively little of the Who's personality came through on the disc. Pete Townshend's guitar in particular bore little resemblance to his power chords and searing feedback on the Who's 1965 singles; the leads on the single were so jazzy and thin that one wonders if they were, in fact, the work of a session musician. In fact, "Zoot Suit" rather overshadows the routine R&B of the A-side, with its unusual minor-key tune and rushed tempo. In any case, the single went virtually unnoticed upon initial release. The group did record two R&B-soul covers at the same session, Bo Diddley's "Here 'Tis" and Eddie Holland's "Leaving Here," that showed them to better advantage, if still a long way off from their great 1965 power pop recordings. Both of those songs eventually found official release on archival Who compilations.

Both sides of their only official single release, Zoot Suit / I'm the Face (released on major mod label Fontana in 1964), were works of plagiarism; respectively, "Zoot Suit" and "I'm the Face" were Meaden's reworkings of "Misery" by The Dynamics, and "I Got Love If You Want It" by Slim Harpo. Both were well-known mod songs; by all accounts, angered mods were the primary cause the single's failure. The band quickly broke off their association with Meaden, and would shortly earn the mods' affection, and indeed became one of the most emblematic "mod" bands of all time.

The High Numbers wisely changed their name back to the Who by November 1964, by which time they had also changed management, replacing Meaden with Kit Lambert and Chris Stamp. Whether this was intentional or not, it also erased any stigma that might have been attached to them as the result of the High Numbers' flop 45, and allowed them to present their first 1965 single, "I Can't Explain," as the debut of a brand-new band, the Who. Very rare for a decade, "I'm the Face" and 'Zoot Suit" appeared on Who compilation albums in the '70s, 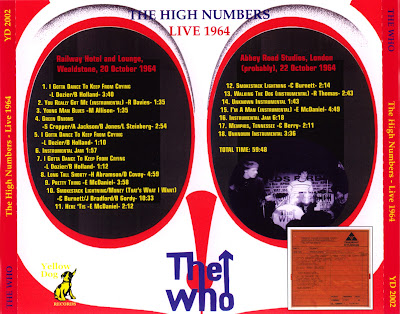 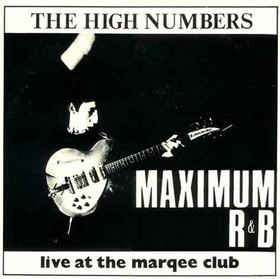 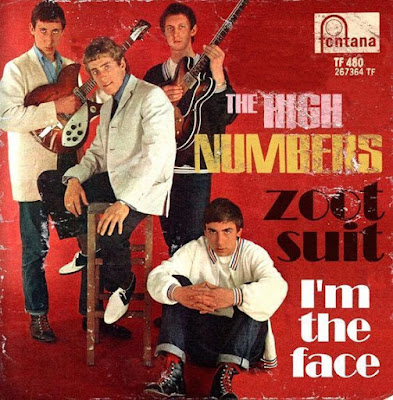 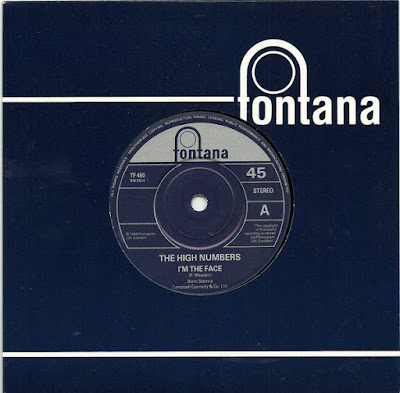 Email ThisBlogThis!Share to TwitterShare to FacebookShare to Pinterest
tags 60's, R&B, Rock, The High Numbers, The Who, UK