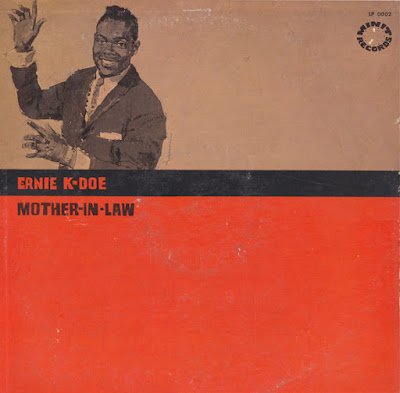 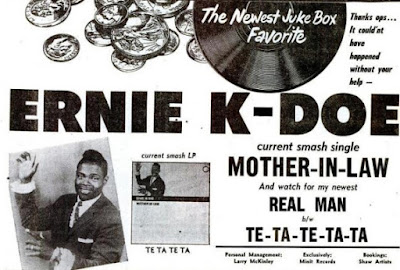 Ernie K-Doe scored one of the biggest hits (possibly the biggest) in the history of New Orleans R&B with "Mother-in-Law," a humorous lament that struck a chord with listeners of all stripes on its way to the top of both the pop and R&B charts in 1961. The song proved to be K-Doe's only major success, despite several more minor hits that were equally infectious, yet he remained one of New Orleans' most inimitable personalities. Born Ernest Kador, Jr. in New Orleans in 1936, he began singing at age seven in the Baptist church where his father served as minister. During his teen years, Kador performed with local gospel groups like the Golden Chain Jubilee Singers and the Zion Travelers, when he was influenced chiefly by the Five Blind Boys of Mississippi. He entered and won talent competitions and became more interested in secular R&B and blues, and at 17, he moved to Chicago with his mother and began performing at local clubs. Thanks to connections he made there, he got the chance to sing with the Flamingos and Moonglows, as well as the Four Blazes, a gig that earned him his first recording session in late 1953 for United.

Kador returned to New Orleans in 1954 and honed his flamboyant stage act at numerous local hangouts (including the famed Dew Drop Inn), both solo and as part of the vocal group the Blue Diamonds. The Blue Diamonds cut a couple of sides for Savoy in 1954, and the following year, Kador (still billed under his real name) recorded his first solo single, "Do Baby Do," for Specialty. In 1957, he recorded a few more sides for Ember, as both Ernie Kado and Ernie K-Doe. Finally, in 1959, he caught on with the newly formed Minit label and hooked up with producer/songwriter/pianist/arranger/future legend Allen Toussaint. His first Minit single, "Make You Love Me," flopped, but the follow-up, "Hello My Lover," was a substantial regional hit, selling nearly 100,000 copies. K-Doe struck gold with 1961's "Mother-in-Law," a Toussaint-penned tune on which K-Doe traded choruses with bass vocalist Benny Spellman. That, coupled with the playful cynicism of the lyrics, made for a rollicking good time in the best New Orleans R&B tradition, and K-Doe was rewarded with a number one record on both the pop and R&B charts. He toured the country and landed a few more follow-up hits -- "Te-Ta-Te-Ta-Ta," "I Cried My Last Tear," "A Certain Girl" (later covered by the Yardbirds), "Popeye Joe" -- but none approached the phenomenon of "Mother-in-Law," and were more popular on the R&B side.

Minit soon went under, and K-Doe followed Toussaint to the Instant label, but two 1964 singles failed to revive K-Doe's chart fortunes, partly because the early prime of New Orleans R&B was fading as Motown gained prominence. Over the remainder of the '60s, K-Doe recorded for Peacock and Duke, landing two very minor R&B chart entries in 1967 with "Later for Tomorrow" and "Until the Real Thing Comes Along" on the latter label. However, he had a difficult time adapting his loose, playful style to the R&B trends of the day. He reunited with Toussaint for a brief period in the early '70s, to no avail, and drifted into a long period of alcoholism. Fortunately, K-Doe was able to reclaim some of his popularity around New Orleans when he began hosting a radio program in 1982, earning an audience with his wild antics and blatant self-promotion. In 1994, K-Doe opened his own club, Mother-in-Law Lounge, in New Orleans, and frequently performed there in the years to come, occasionally returning to the studio as well. He was inducted into the city's Music Hall of Fame in 1995 and generally acknowledged for his contributions up until his death from kidney and liver failure on July 5, 2001. 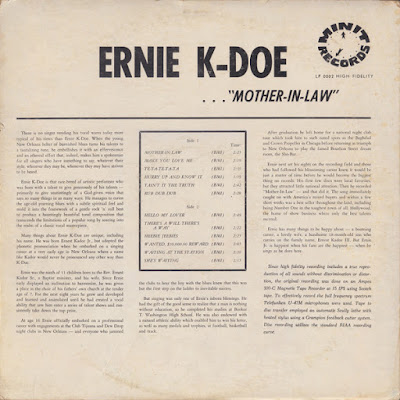