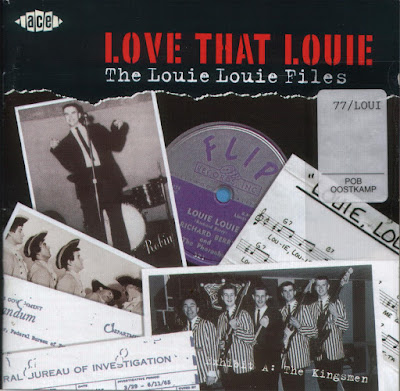 The "Louie Louie" saga is about as interesting as any song's journey through the rock & roll folk process. Its arrangement evolved several times via several cover versions between the time author Richard Berry did the first one in 1957 and the Kingsmen had a number two hit with it in 1963. Since then it's been covered innumerable times, of course. This disc presents no less than 15 versions of the tune, as well as three pre-Berry songs that influenced the first "Louie Louie," four basic "Louie Louie" rewrites, and two "sequels" to "Louie Louie." That's 24 tracks in all, chronologically spanning Johnny Mercer's 1951 recording of "One for My Baby (And One More for the Road)" (a lyrical inspiration for the Berry composition) to Toots & the Maytals' 1972 reggae interpretation. The biggest coup in this rather extraordinary document is the first CD reissue of the original Richard Berry 1957 Flip recording, which had previously been license-proof. Of course, the Kingsmen's hit single is here as well, but the real treat is the variety of takes by other artists, some of them quite rare, most of them relatively little-heard. There are a half-dozen 1960s versions from the Northwest, including ones by Rockin' Robin Roberts & the Wailers (the act most responsible for reviving it into a more rock-oriented arrangement), the Kingsmen, Paul Revere & the Raiders (whose 1963 single competed head-to-head with the Kingsmen, but lost out nationally), and the Sonics. There are covers by 1960s stars the Beach Boys, Otis Redding, and the Kinks. There's the obscure mid-'60s garage version by the Swamp Rats and easy listening renditions by the Sandpipers and Sounds Orchestral. There are the sequels "Have Love Will Travel" by Richard Berry and "Louie Go Home" by Paul Revere & the Raiders. There's an attempt to revive "Louie Louie" by the lead vocalist on the Kingsmen's single, on Jack Ely & the Courtmen's "Louie Louie '66." There's even Rene Touzet's 1956 cha-cha "El Loco Cha Cha," which contains a riff that's very similar to the principal one of "Louie Louie." Does it get too be too much, these two dozen "Louie Louie"s or spinoffs thereof one after the other? Not really; there's a good amount of variety to the arrangements, some of the versions are really good, and it's historically fascinating. No doubt some major collectors might bewail the absence of an item or two, like the young David Bowie's cover of "Louie Go Home" (as lead singer of Davie Jones & the King Bees on the B-side of his 1964 debut single) or the Epics' wild 1965 garage soul takeoff "Louie Come Home." But this is an excellent and fun collection of the most important versions, and considerably superior to previous anthologies that have assembled multiple "Louie Louie" interpretations. It's also boosted by lengthy and fascinating (if eye-strainingly small) liner notes detailing each track and the song's evolution, augmented by interviews with some of the key figures on some of the most important recordings of the tune. ~ Richie Unterberger, All Music Guide 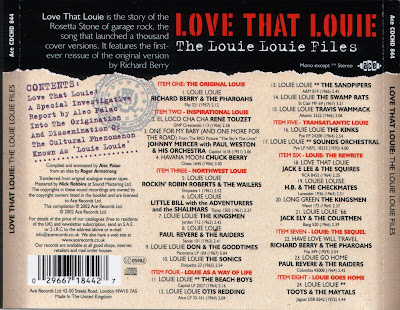