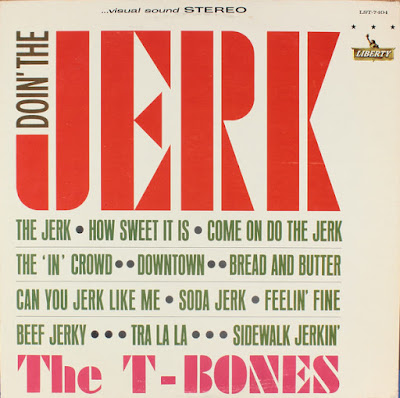 The T-Bones were a Liberty Records recording group from 1963 - 1966. The studio recordings of all of their albums but the last were done by American session musicians, The Wrecking Crew (6)
They should not be confused with the British mid-1960s band of the same name The T-Bones (2). In Britain, the name "U.S. T-Bones" was used for the Liberty Records group.
When the T-Bones had a hit in 1966 with the single No Matter What Shape (Your Stomach's In), Liberty Records quickly recorded an album of the same name using session musicians from The Wrecking Crew, but those musicians weren't willing to go on tour to promote the album. They were making too much money doing sessions in Los Angeles. So Liberty created a different "public" T-Bones group to appear on record covers, TV, and in concert. The "public" T-Bones were Judd Hamilton, Dan Hamilton, Joe Frank Carollo, Tommy Reynolds, and Gene Pello. None of them played on the hit record, nor did they play on the next album, "Sippin' and Chippin." However the "public" T-Bones did record the T-Bones' final album, "Everyone's Gone To The Moon (And Other Trips)." Dan Hamilton, Carollo, and Reynolds would later form the 1970s soft rock trio Hamilton, Joe Frank and Reynolds.
"No Matter What Shape (Your Stomach's In)", was based on the melody from a commercial for Alka-Seltzer. The tune reached #3, and its follow-up, "Sippin N Chippin", peaked at #62; the accompanying album hit #75 on the Billboard 200. 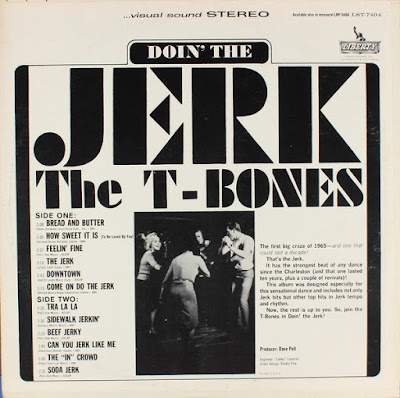