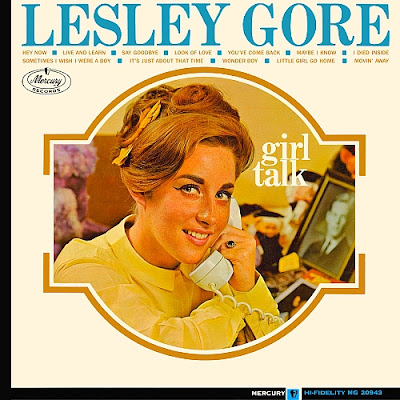 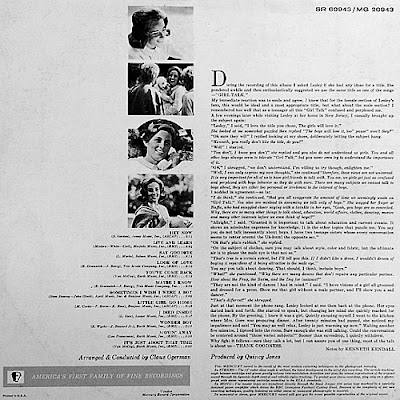 Lesley Sue Goldstein (May 2, 1946 – February 16, 2015), known professionally as Lesley Gore, was an American singer, songwriter, actress, and activist. At the age of 16 (in 1963) she recorded the pop hit "It's My Party", and followed it up with other hits including "Judy's Turn to Cry", "She's a Fool", "You Don't Own Me", "Maybe I Know" and "California Nights". When she recorded her version of "It's My Party" with Quincy Jones in 1963, she was a junior in high school. It became a number-one, nationwide hit. Gore's version sold over one million copies and was certified as a gold record. It also marked the beginning of a time when fans would show up on her front lawn. "It's My Party" was followed by many other hits for Gore, including the sequel, "Judy's Turn to Cry" (US No. 5); "She's a Fool" (US No. 5); the feminist-themed million-selling "You Don't Own Me",[6] which held at No. 2 for three weeks behind the Beatles' "I Want To Hold Your Hand"; "That's the Way Boys Are" (US No. 12); "Maybe I Know" (US No. 14/UK No. 20); "Look of Love" (US No. 27); and the Grammy-nominated "Sunshine, Lollipops and Rainbows" (US No. 13), from the 1965 movie, Ski Party. In 1965 she appeared in the beach party film The Girls on the Beach in which she performed three songs: "Leave Me Alone", "It's Gotta Be You", and "I Don't Want to Be a Loser". Gore was given first shot at recording "A Groovy Kind of Love" by songwriters Carole Bayer and Toni Wine with a melody borrowed from a sonatina by Muzio Clementi, but Shelby Singleton, a producer for Mercury subsidiary Smash Records, refused to let Gore record a song with the word "groovy" in its lyrics. The Mindbenders went on to record it, and it reached No. 2 on the Billboard charts. Gore recorded composer Marvin Hamlisch's first hit composition, "Sunshine, Lollipops and Rainbows", on May 21, 1963, while "It's My Party" was climbing the charts. Her record producer from 1963 to 1965 was Quincy Jones. Jones' dentist was Marvin Hamlisch's uncle, and Hamlisch asked his uncle to convey several songs to Jones. "Sunshine, Lollipops and Rainbows" was released on the LP Lesley Gore Sings of Mixed-Up Hearts, but did not surface as a single until June 1965. Hamlisch composed three other Gore associated songs: "California Nights", "That's the Way the Ball Bounces" and "One by One". "That's the Way the Ball Bounces" was recorded September 21, 1963, at A&R Studios in New York; it was released as the B-side of "That's the Way Boys Are" and appeared on the LP Boys Boys Boys. "One by One" was an unreleased track recorded on July 31, 1969, in New York and produced by Paul Leka; it first appeared on the Bear Family five-CD anthology of Gore's Mercury work entitled It's My Party (1994). Gore was one of the featured performers in the T.A.M.I. Show concert film, which was recorded and released in 1964 by American International Pictures, and placed in the National Film Registry in 2006. Gore had one of the longest sets in the film, performing six songs including "It's My Party", "You Don't Own Me", and "Judy's Turn to Cry". Gore performed on two consecutive episodes of the Batman television series (January 19 and 25, 1967), in which she guest-starred as Pussycat, one of Catwoman's minions. In the January 19 episode "That Darn Catwoman", she lip-synched to the Bob Crewe-produced "California Nights", and in the January 25 episode "Scat! Darn Catwoman" she lip-synched to "Maybe Now". "California Nights", which Gore recorded for her 1967 album of the same name, returned her to the upper reaches of the Hot 100. The single peaked at No.16 in March 1967 (14 weeks on the chart). It was her first top 40 hit since "My Town, My Guy and Me" in late 1965 and her first top 20 since "Sunshine, Lollipops, and Rainbows". Gore also performed the single "We Know We're in Love" ten months earlier on the final episode of The Donna Reed Show, which aired on March 19, 1966. After high school, while continuing to make appearances as a singer, Gore attended Sarah Lawrence College, studying British and American English literature. At college folk music was popularly lauded as 'chic', whereas pop music was often derided as 'uncool.' She graduated in 1968. Gore signed a contract with Mercury Records for five years, which carried her obligations to the company through the spring of 1968. Her last big hit had been twelve months prior to this time, but Mercury still saw promise in her as an artist, and believed that one of her singles would make it, like they had in the past. They offered a one year extension on the initial contract, and Gore was formally contracted to Mercury for a sixth year. During this time, "He Gives Me Love (La La La)", a single release based on a Eurovision Song Contest winner, rose to #96 on the Music Business charts, while bubbling under the hot 100 in Billboard. Mercury took out a full page ad in the trades to support the single, but its airplay was spotty, becoming a hit in only a few major markets. She was then paired with the successful soul producers Kenny Gamble, Leon Huff and Thom Bell for two acclaimed singles that took her into the "soul" genre: "I'll Be Standing By" and "Take Good Care (Of My Heart)." These songs did not fit the image Mercury had crafted for her, and the singles were not played. Her contract with Mercury ended after the release of "98.6/Lazy Day" and "Wedding Bell Blues" failed to make headway on the charts. In 1970, she signed with Crewe Records and was reunited with producer Bob Crewe, who had produced her album "California Nights". None of the Crewe releases charted.