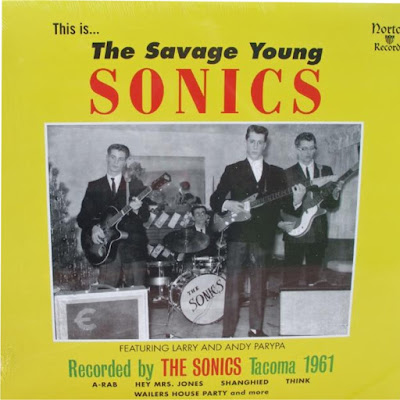 Before the Kinks and the Who came along and planted the seeds for what is commonly referred to as proto-punk, several obscure and/or one-hit U.S. wonders beat the two aforementioned British acts to the punch -- the Kingsmen, the Trashmen, and the Sonics. While the Kingsmen and the Trashmen managed to score a massive hit each ("Louie, Louie" and "Surfin' Bird," respectively), the Sonics never broke through outside of their home city of Tacoma. Regardless, the Sonics are often name-checked as one of the greatest garage rock bands ever, and the 2001 compilation This Is... The Savage Young Sonics focuses entirely on the group's early years. It turns out that the father of the Sonics' brother guitar/bass tandem, Larry and Andy Parypa, taped nearly every live show the group played during the early '60s, and these recordings serve as the basis for this 20-song release. Although the group was still a ways off from perfecting its tough-and-rough sound (which eventually included a heavy R&B influence), the comp includes such early instrumentals as "Sonic Blues" as well as covers of popular bar band standards of the day -- "Rumble," "Bony Maronie," "Keep A-Knockin'," and even the aforementioned "Louie, Louie." While newcomers should stick with one of their classic mid-'60s releases (e.g., 1965's Here Are the Sonics), longtime Sonics fans looking to trace the group's roots will certainly be able to do so with This Is... The Savage Young Sonics. 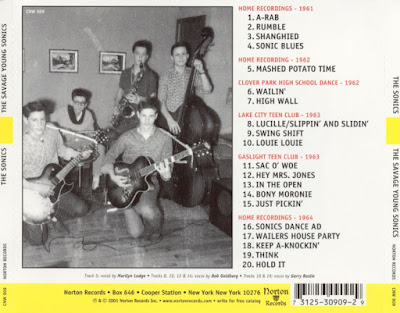