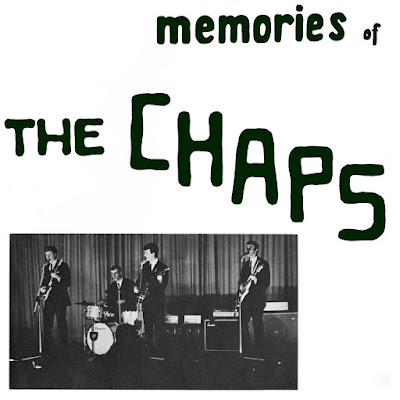 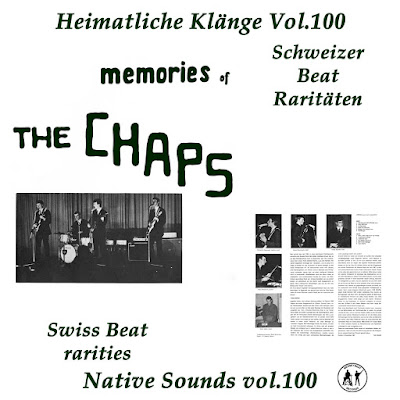 On a clear night in spring 1965 a group of beatfreaks were crawling up the last hill to the "Rheinbundhaus". The musical core of this bunch were Marmo, Luus and Hamster. We were dedicated followers of The Shadows, and it didn't take long to get together with another friend and start rehearsing. We had a ukulele, two acoustic guitars and a bar sieve for a drum. Enough to produce some rattling noise that couldn't be ignored. After even our parents had given up trying to stop us, we formed a real band and never looked back. In December we were ready at last, and tried to get some gigs. After initial failures the owner of Restaurant "Glock" gave us a chance.
The following change of drummer couldn't discourage us, because actually this was the real start of THE CHAPS with Paul Stoob on drums.
Bookings at the "Casita" followed in February 1966. Our best boy Sammy Frank had a lot to do and we were working every Saturday night now. A performance at the "Kitsches-Kitsch Can"-event at the "Kunsthalle" (or was it "Kitsch As Kitsch Can"?) was followed by the first steps across our Canton's border. Zofingen was the place where we tried to bring the house down and survived an Egyptian plague of cockchafers. But hard times were around the corner, and we had our share of ups and downs again, when our manager started to do his bits on the side. His replacement was Urs Gnehm, who soon became a close friend. He perfectly fit in with the band, and with permanent dedication he mananged to get us fantastic engagements. Especially a two week residency at the "Atlantis-Scherz" brought us big success. (And some unexpected surprises which we rather keep to ourselves.)
At last we had achieved our common purpose and owned a proper beatband equipment  without being indebted. Trying to prove that beat musicians not always play for their own profits alone, we organized an open-air concert for the charity action "Bread for Brothers", which was a great success. The hardness test for the band came in 1967. It all started fine with another highlight at the music hall of the city casino, where we were the first beatband booked for a "Fromm-Ball". Prominently featured in a wellknown Basle newspaper we could read what a kind journalist had to say about us. But the crisis came nevertheless. Paul the drummer left in mutual agreement, and we had to look for a fitting substitute. After a long hiatus, The Chaps were in full-blown line-up again by the end of summer 1967. Rico Candio on drums and organist Alain Veltin changed our style copletely, and new engagements soon were offered. It was a pleasure to play the "Atlantis" again, and the "IG-Fest" in the "Freie Strasse" will always stay in good memory. We're still keep talking about it these days.
At the "Technikums-Ball" in Lucerne, where we appeared as a proper ballroom orchestra, we showed that even a beatband is able to provide decent standard dancing music. Time is flying and with the new year in sight we have found yet another drummer. Mike Herbrich is number 11 since we started. Sadly we'll have to give up the band by the end of January 1968, as military service and final examinations inevitably come closer.
Even if our new record may lack some production and and a bit of polish, it's meant as a keepsake, and we dedicate it to all friends and followers who had fun listening to us.
Riehen, December 6th 1967.  THE CHAPS (liner notes translation the lolly pope - thanks!) 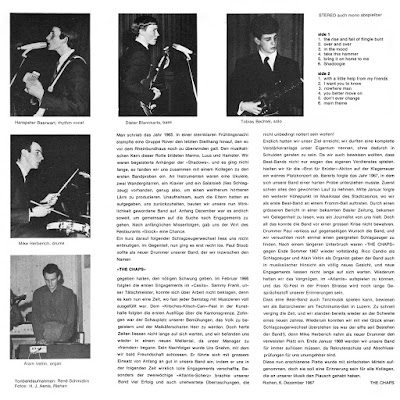