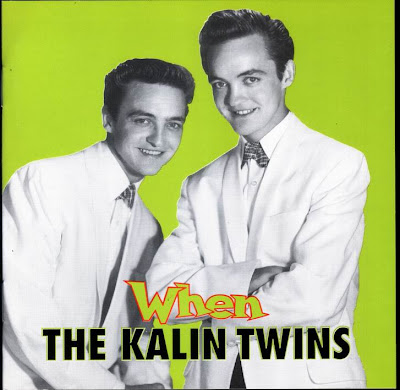 Herbert and Harold Kalin, twin brother harmony singers, sang like a pop-focused version of the Everly Brothers, and they charted a few catchy records in 1958, including one Top Five hit. They represent one of the better acts to find a compromise between rock & roll and pop music, even if they weren't the Everlys by a long shot.
Although Herbert and Harold were born in the same period as Elvis Presley, they came from more of a middle-class background, and from much further north as well. Not surprisingly, their musical preferences lay more with the pop music that preceded Elvis (so, to some degree, did Presley's own taste), and their music was closer in spirit to that tamer third wave of rock & roll, exemplified by Bobby Darin, Paul Anka, and Dion DiMucci.
The Kalins grew up in Port Jervis, NY, and pursued music as a career while in their teens. Their listening ran toward Tony Bennett, Johnny Ray, and Nat King Cole -- they weren't allowed to listen to R&B, although they did get to hear records by LaVern Baker, Ruth Brown, and other R&B stars of the period, even if these weren't central to their taste or experience. Their aspirations to a recording career were delayed until Hal's stint in the Army was over, and the two moved to Washington, D.C., in 1957. This led them to a hookup with songwriter Clint Ballard, who helped them land a contract with Decca Records.
The Kalins' first recording session took place in December of 1957, by which time the rock & roll boom was in full swing -- the record company wanted them to compete for the teen market and insisted that they try something close in spirit and beat to the newer sounds. Their first session yielded a trio of songs that went nowhere, but they struck gold three months later with "When," a catchy romantic pop/rocker with a good beat (originally intended as a B-side) that rose to number five in the United States and number one in England. 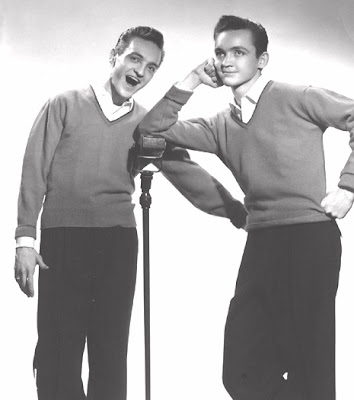 They appeared on The Milt Grant Show, Washington's answer to American Bandstand, and became nationally known, appearing on the typical package tours of the period. "Forget Me Not," a hastily scheduled and recorded follow-up done while they were on the road promoting the big hit, was notably less successful. Their next single, the ethereal and catchy "It's Only the Beginning," however, could have been close in spirit to the Everly Brothers, but for the inclusion of the chorus behind the brothers. During this period, they also recorded a pair of their own songs, "Clickety Clack" and "Oh! My Goodness."
By the middle of 1959, they were working in Nashville with Owen Bradley and doing songs by, among others, Felice and Boudleaux Bryant, who had previously supplied the Everlys with material. The Bryants' "Sweet Sugar Lips" -- the Kalins' final chart entry, at number 97 -- was as close to the Everlys' sound as the Kalins ever got, soft country-based rock complete with Hank Garland on guitar and Floyd Cramer at the piano. Meanwhile, out on the road, the Kalins also performed in England, opening for Cliff Richard.
Back home, the Kalin Twins kept recording until 1962, even hooking up with their one-time mentor, Clint Ballard. Among the highlights of the later part of their recording career were the duo's cover of "Zing, Went the Strings of My Heart," which recalled "When," and their soaring cover of "Picture of You," a hit in England for Brit-rocker Joe Brown (Paul McCartney has also been known to sing it, though not formally in concert). They also left behind a body of unreleased material from Nashville, featuring Garland and Cramer, that was fairly solid pop/rock.
As the 1960s dawned, the Kalins moved away from teen-oriented numbers, preferring to perform more mature material. Curiously, although their influence in the United States was minimal, it is probable that their number one hit in England with "When" was an influence on the fortunes and perhaps even the sound of the Brook Brothers, an English brother act (signed to Pye Records) with a nearly identical sound. The Kalins ceased recording after 1962, but three decades later, they were still performing as a pop-nostalgia act before audiences in their 50s.
01 - When 1958
02 - Three O'Clock Thrill 1958
03 - Jumpin' Jack 1958
04 - Walkin' To School 1958
05 - The Spider And The Fly 1958
06 - Forget Me Not 1958
07 - Dream Of Me 1958
08 - Oh! My Goodness 1959
09 - Chicken Thief 1960
10 - It's Only The Beginning 1959
11 - Clickety Clack 1958
12 - Sweet Sugar Lips 1959
13 - Moody 1959
14 - A Picture Of You 1962
15 - You Mean The World To Me 1958
16 - School Bell Dream 1958
17 - When I Look In The Mirror 1959
18 - I'm Gonna Knock On Your Door 1992
19 - Little Miss Blue 1992
20 - Bye, Bye Blackbird 1992
21 - Make Love To Me 1992
22 - Sail Along, Silvery Moon 1992
23 - True Love 1992
24 - Tonight You Belong To Me 1960
25 - Zing, Went The Strings Of My Heart 1960
26 - Momma Poppa 1960
27 - No Money Can Buy 1960
28 - Bubbles 1961
29 - One More Time 1961
30 - It's Just Terrible 1992
Posted by: D&J на 17:21