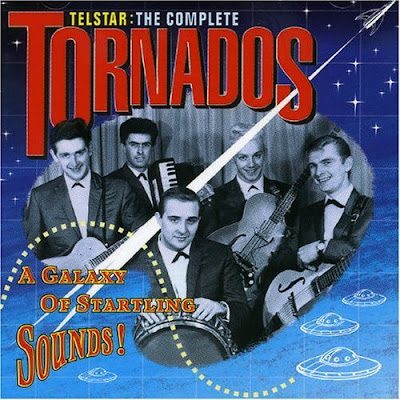 One of the saddest stories in rock & roll history surrounds the Tornados, an instrumental group from Britain. Although there were other groups with the same name (see listing for their surf-band American counterparts), this batch of Tornados were the creation of British producer Joe Meek.

Meek was England's first independent producer, being equal parts Thomas Edison, Phil Spector, and Ed Wood. An inveterate tinkerer, he designed his own compression units and microphone pre-amps, giving his productions their own distinct sound. Setting up a homemade studio in a three-story flat on Holloway Road in London, Meek pioneered such recording techniques as close miking of instruments, distortion, his aforementioned trademark compression, loud drums fortified by percussion from pocket combs, milk bottles, and stomping the floorboards himself. He put together the original Tornados in late 1961 as a studio session group, its original lineup consisting of Alan Caddy and George Bellamy on guitars, Roger LaVern on organ, Heinz Burt on bass, and Clem Cattini on drums. After one single flopped, Meek had the group do one of his compositions, an instrumental called "Telstar." Utilizing willful distortion, cheap tape echo, beeping satellite sound effects, a cheesy-sounding Clavioline (a two-octave keyboard powered by a battery), and massive amounts of tube compression, the resulting production sounded like nothing else at the time, or since. It became the first number one record on the American charts by a British rock group and ended up selling five million copies worldwide. It should have made Meek a millionaire and the Tornados a household name. But a French copyright infringement suit kept all royalties tied up for six years, and the Tornados were kept from touring the United States behind their international hit due to a contract employing them as a backup group to U.K. pretty boy Billy Fury. By the time the dust settled, the Tornados had gone hitless for several years, and so had Joe Meek. After numerous personnel changes, the original members scattered to various groups, Heinz Burt starting his own solo career and Cattini becoming a British session mainstay of producer Shel Talmy. The copyright infringement suit was ruled in Meek's favor six years later, a year after he had blown his face off with a hunting rifle after murdering his landlady, ending his life in his beloved but debt-ridden studio.

Fifty-five Tornados tracks on two CDs may be 53 more than most casual listeners need, but this double-disc set justifies itself in the listening. To most Americans, and even most Britons, the Tornados were one-hit wonders, responsible for "Telstar" and not much else, but as this set shows, they did come up with some cool sounds and tunes under the guidance of producer/manager Joe Meek. "Robot" is nearly as pretty a tune as "Telstar" (it also charted in England at No. 17), and it sounds fresh, as something not nearly as widely heard for 36 years; "Life On Venus," the B-side, is a very close second, almost a "son of Telstar." "Ice Cream Man" was another British chart single, and offers the spectacle of Meek and the Tornados applying a Bo Diddley beat to their trademark sound. Other highlights include lots of television themes, both material for actual use on the air and the group's covers of such as material as "Stringray" and "Aqua Marina" from the sci-fi kids' show Stringray. The material extends right into 1964 and the band's attempts to compete in the area of vocal records, when it became clear that the public wasn't too interested in instrumental rock & roll anymore. The annotation includes a beautifully detailed essay by Chris Welch, with extensive interview material on drummer Clem Cattini (the longest-tenured member of the Tornados) and Cattini's recollections on each of the tracks here. In the end, there's more to the Tornados' sound and history than most of us knew, all revealed here.
Posted by: D&J на 14:23