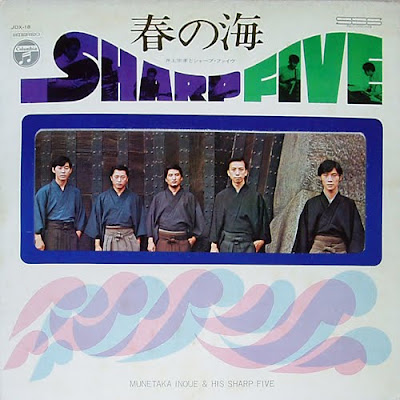 Japan Eleki/Surf/Instrumental Rock
"Sharp Five were an instrumental eleki / psychedelic garage combo from japan. Wicked guitar licks and Ventures-esque surf wah-wah fuzzed-out and psyched-up with an oriental sonic garage back bass. Overall a slightly trippier flavour of eleki . This is generally regarded as their best album..."
JAPANESE ELEKI and the VENTURES INFLUENCE
Japanese Eleki and the Ventures Influence
In May 1962, American instrumental kings, the Ventures, made the first of many tours of Japan.  Japanese teenagers immediately flipped over their sound and started forming instrumental combos in the style of the Ventures.
When the Ventures returned to Japan in January 1965 they had become household names and the impact of their music on Japanese teenagers was enormous. Unhindered by the language barriers inherent in performing American or British vocal music, hundreds of Eleki (Japanese English for "electric," as in electric guitars) combos sprung up all over the country.
Domestic guitar manufacturers such as Guya couldn't keep up with the demand, so companies usually associated with other industries such as Victor (better known as JVC in the U.S.) began producing electric guitars. (Even a manufacturer of wooden clogs got in on the act!)  In 1965 760,000 guitars were made in Japan, a record that has yet to be broken.
Yuzo Kayama and Takeshi Terauchi
Two guitarists of particular note who came out of the Eleki Buumu (Eleki Boom) are Takeshi Terauchi and Yuzo Kayama.
Takeshi Terauchi's style is very Ventures-influenced, but much faster and more frantic with a heavy picking style and liberal use of his Mosrite guitar's whammy bar.  Terauchi is probably Japan's first guitar hero and he's continued recording and touring through the years.
Yuzo Kayama first came to fame in 1961 as the dashingly handsome young star of the "Wakadaisho" ("Young General") series of teen films.  Heavily influenced by the Ventures he formed a backing group, the Launchers and started recording for Toshiba Records.
In Yuzo Kayama's second "Wakadaisho" film, the 1965 feature, "Eleki No Wakadaisho" ("The Young General's Electric Guitar"), Kayama and Takeshi Terauchi perform together backed by the Launchers and they blast the place to pieces!
Two of Yuzo Kayama's best known instrumentals, "Black Sand Beach" and "Yozora No Hoshi," were even covered by the Ventures, who were so impressed with Kayama and the Launchers that they presented him with one of their own signature-model Mosrite guitars!
http://www.thevideobeat.com/eleki-yuzo-kayama.htm
Munetaka Inoue & His Sharp Five - Haru No Umi (1968)
Munetaka Inoue (drums), Nobuhiro Mine (lead guitar), Osumu Furuya (organ), Hidemasa Yamauchi (rhythm guitar), Masaaki Ito (bass guitar, 1967-69), Akiyama Tsutomu (bass guitar, ?-1967), Maeda Akira (guitar, ?-1967), Sannai Emi (rhythm guitar, ?-1967), Nishizima Makoto (bass guitar, 1969-?)
1. Haru No Umi (6:59)
2.  Rokudan (4:41)
3. Chidori No Kyoku (2:08)
4. Yakkosan (2:13)
5. Etanraku (3:40)
6. Sakura Sakura
7. Gion Kouta
8. Kiyari Kuzushi
9. Sanosa Bushi
10.  Haru No Umi
Posted by: D&J на 22:46