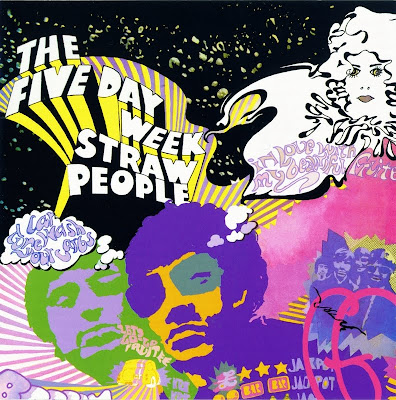 \\
The Five Day Week Straw People were a one-off, studio-only British psychedelic band that did one rare album in late 1967 (actually released in 1968) for the budget Saga label. Its ten songs were loosely centered around the concept of a typical weekend in the life of typical working British people. For a fee of 25 pounds per musician, the Five Day Week Straw People -- comprised of singer/guitarist John Du Cann (of the obscure psychedelic pop group the Attack, who did four singles for Decca), bassist Mick Hawksworth, and drummer Jack Collins -- were assembled. The album was recorded in about four hours in a London schoolroom, a remarkable achievement given that Collins had not heard any of the songs prior to the session.

While the album (simply titled Five Day Week Straw People) has attracted some fanatical praise among collectors, it's average-period British psychedelia. It leans a little more toward heavy rock than toward mod, although there are some strong pop elements in the vocal harmonies and the British storytelling lyricism. At times, it's reminiscent of the most pop-oriented material that Cream recorded. The same could be said of some of the stuff done by Andromeda, the group that Du Cann, Hawksworth, and Collins decided to found after cutting the Five Day Week Straw People LP, although Andromeda was definitely in a heavier, hard rock vein. Five Day Week Straw People/The Attack was reissued on CD by Angel Air in 2000, with nine unreleased songs by the Attack added as bonus tracks. 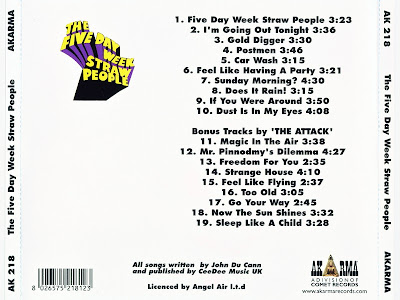 This CD is actually a reissue of the self-titled 1968 album by the Five Day Week Straw People, who, like the Attack, featured guitarist John Du Cann. However, it's also about as much an Attack album as a Five Day Week Straw People album, since nine of the 19 songs are 1967-1968 era Attack demos, added to the CD as bonus tracks. It's fair, but no more than fair, British mod-psychedelia, catching the very beginning of the moment when U.K. psych started to head in a consciously heavy direction. Two of the cuts, "Freedom for You" and "Feel Like Flying," would have been the fifth Attack single had they not been dropped by Decca, and "Freedom for You" is certainly one of the best things they recorded, with a breathless, hard pop tempo and pretty good minor-key harmonies. For the most part it's pretty standard period British pop-psych, with some of the more serious and louder numbers indicating that the group might have been pretty intense Cream fans. Occasionally, as on "Magic in the Air," there's that fruity, childlike British whimsy characteristic of many pop-psychedelic hybrids from that short but intense period of British pop. This shouldn't be taken as a definitive representation of the Attack sound, though, as it has nothing from their four 1967-1968 Decca singles; most of the tracks from those have shown up on various artist compilations. Incidentally, the Five Day Week Straw People album that precedes the Attack material on this disc is likewise average period British psychedelia. It's pretty similar to the Attack demos, but a tad artier, as the songs fit into a loose concept of vignettes in the lives of average British people during a typical weekend.
http://allmusic-wingsofdream.blogspot.com/2010/03/attack-about-time-1966-68.html
Posted by: D&J на 20:48