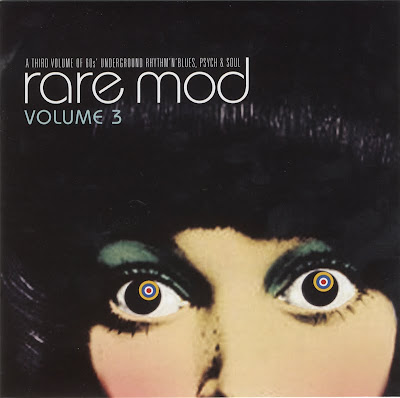 Volume 3 sees the best collection yet - some of the finest underground mod, rhythm and blues and beat bands of the sixties, all digging out those unreleased acetates from on top of wardrobes, suitcases in the attic and in some cases, unheard studio master-tapes.

On a 'mod' compilation you would expect mostly nothing but mod styled beat / garage / freakbeat, but there are a few exceptions. Take the London born Andee Silver who made this recognisable Motown pop single, here included. Female pop hardly is found on mod compilations, but there's another one. Goldie & The Gingerbreads, more being an American harmony vocalist band, found most of its success opening before The Rolling Stones and touring with The Kinks. Different but not in a too great sense also is the 'Northern Soul' band Kenny Bernard & The Wranglers, with another version of “In the midnight hour”, another connection to London. There are two tracks in earlier 60s styles and a few bluesier tracks included for one more London connection. Such tracks makes the compilation a bit more alternated, while it is of course the mod connection which gives most of the expected / sought after satisfaction. There has been enough background info and a few rare photographs of many of the bands/recordings added. Nothing is completely surprising like mod hardly does for me, although a few songs could have made a bigger public with the right connections and circumstances. The compilation is already worth checking out for The Creation's Beatlesque string soaked song.
http://www.psychemusic.org/sixties6.html
Mod, you can't live with it, you can't live without it! - whilst this extraordinarily resilient youth culture continues to defy the natural laws of science and quietly die, unnoticed in some dingy corner of a Soho alley, it is again reborn, embraced by a new generation of British youth - the thirst for original mod iconography, history and music has never been greater, so Acid Jazz records prepare for the release of their third instalment of the evergreen RARE MOD series… 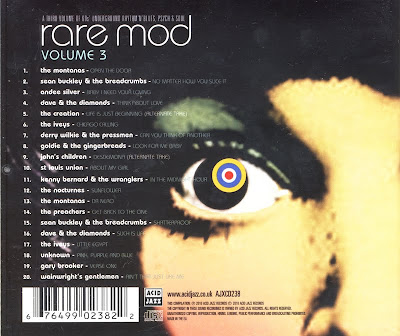 Familiar names like The Creation and John's Children with alternate takes of both Life Is Just Beginning and Desdemona (which features some previously unheard Marc Bolan vocals). Lesser lights such as The Iveys, The Preachers (featuring a young Peter Frampton), Gary Brooker (later of Procul Harum) and St Louis Union contribute amazingly rare material - there's British soul from Goldie & The Gingerbreads, Kenny Bernard & The Wranglers (who boasted a young David Bowie on saxophone as part of their early line-up) and Andee Silver, psych from The Montanas and Dave & The Diamonds (up there with anything on the original Nuggets release!), R&B from Sean Buckley & The Breadcrumbs or Derry Wilkie & The Pressmen....
Rare Mod volume 3
01. Open The Door - The Montanas
02. No Matter How You Slice It - Sean Buckley & The Breadcrumbs
03. Baby I Need Your Loving - Andee Silver
04. Think About Love - Dave & The Diamonds
05. Life Is Just Beginning - The Creation
06. Chicago Calling - The Iveys
07. Can You Think Of Another - Derry Wilkie & The Pressmen
08. Look For Me Baby - Goldie & The Gingerbreads
09. Desdemona - John's Children
10. About My Girl - St Louis Union
11. Midnight Hour - Kenny Bernard & The Wranglers
12. Sunflower - The Nocturnes
13. Dr Nero - The Montanas
14. Goodbye Girl - The Preachers
15. Shatterproof - Sean Buckley & The Breadcrumbs
16. Such Is Life - Dave & The Diamonds
17. Little Egypt - The Iveys
18. Pink, Purple & Blue - Unknown
19. Verse One - Gary Brooker
20. Ain't That Just Like Me - Wainwright's Gentlemen
VOLs 1; 2 :
http://allmusic-wingsofdream.blogspot.com/2010/11/va-rare-mod-collection-of-60s.html?showComment=1290613927649
Posted by: D&J на 14:26