The Wild Oats - Live At Leiston 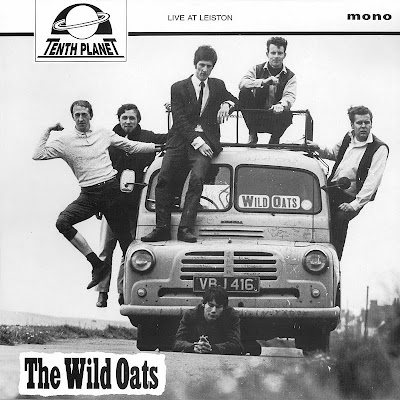 ....In early 1963 an association with David Rattle - a local fan of the group who was apparently well connected in the entertainments industry - led to the Rebels changing their name to the Wild Oats despite the misgivings of certain members of the band, who felt that this new name portrayed them as country yokels. Shortly afterwards Rattle introduced them to David Nicolson, who had recently advertised for bands in the New Musical Express. Nicolson, who worked in EMI's press office, was described in Johnny Rogan's 1988 book 'Starmakers and Svengalis' as 'a typical Sixties whizz kid dabbling on the fringes of the music business who harboured dreams of establishing himself as a manager/producer in the Andrew Loog Oldham/Larry Page mould'. It was Nicolson who financed the Wild Oats' first trip to a recording studio in mid-1963, when versions of Marvin Rainwater's 'Whole Lotta Woman' and an obscure Elvis Presley song 'Put The Blame On Me' were cut at the R G Jones studio in Morden.....
01 RAM BUNK SHUSH
02 I'M WITH YOU
03 (AIN'T THAT) JUST LIKE ME
04 YOU BETTER MOVE ON
05 WALKING THE DOG
06 HUNGRY FOR LOVE
07 BOYS
08 I'M TALKING 'BOUT YOU
09 I'LL NEVER GET OVER YOU
10 SHADOOGIE
11 I SAW HER STANDING THERE
12 I KNOW
13 POINTED TOE SHOES
14 SWEETS FOR MY SWEET
15 PUT THE BLAME ON ME
16 POISON IVY
17 SHAKE SHERRY
18 MONEY (THAT'S WHAT I WANT
The Wild Oats were:
WILLY BROWN  lead vocals (tracks 2-9 and 18), backing vocals
CARL HARRISON  lead vocals (tracks 11-17), backing vocals
TREV ROWLAND lead guitar, backing vocals
ROBIN HARE rhythm guitar, backing vocals ROD GOLDSMITH bass
STYKX SCARLETT drums 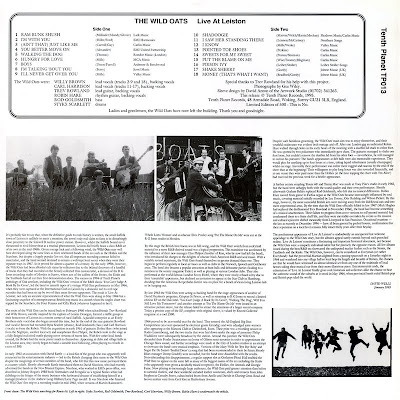