The Outcasts - I'm in Pittsburgh and it's raining 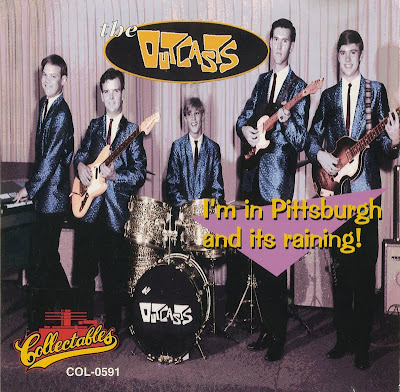 REPOST&REQUEST
One of several American garage bands to use the Outcasts name in the '60s, this Long Island, NY outfit was a very typical act of the era, performing the usual garage raunch, White soul, Monkees-like pop, and Donovanish flower power. They only issued two singles, but an entire album of material was fabricated for release in the 1980s by embellishing the officially released cuts with live performances and previously unreleased songs. Archival diligence notwithstanding, it's not worth tracking down, even for garage diehards.
1. The Outcasts - I'm in Pittsburgh and it's raining
2. The Outcasts - Smokestack lightning
3. The Outcasts - Sweet Mary
4. The Outcasts - Route 66
5. The Outcasts - I'll set you free
6. The Outcasts - Everyday
7. The Outcasts - What price Victory
8. The Outcasts - My love
9. The Outcasts - My generation
10.The Outcasts - Smokestack Lightning (single)
11. The Outcasts - 1523 blair
12. The Outcasts - Season of the wich
13. The Outcasts - come on over
14. The Outcasts - The birds
15. The Outcasts - I'm in Pittsburgh (early reharsal)
16. The Outcasts - Track 16
One of any number of garage bands to operate under the Outcasts name, this particular psych-punk unit formed in San Antonio in 1964 -- keyboardist/harpist Buddy Carson, guitarist Denny Turner, and drummer Rickey Wright comprised the founding lineup, with second guitarist Jim Carsten and bassist Jim Ryan signing on as the year drew to a close. In 1965, the Outcasts entered Texas Sound Studios to cut their debut single, the self-released ballad "Nothing Comes Easy" -- the record is perhaps most notable because it was written and produced by Mike Post, the future composer of hit TV themes including Hill Street Blues, Magnum P.I., and The A-Team. Post, then in basic training at nearby Lackland Air Force Base, also hired the Outcasts to serve as the backing band in a military musical production he was producing. The group signed to the Askel label to issue its followup single, 1966's Carsten-penned "I'm in Pittsburgh (And It's Raining)" -- the Outcasts' biggest local hit, it remains a garage classic thanks in no small part to Carsten's galvanizing harmonica and Wright's propulsive drumming. The band released two more singles for Askel, "I'll Set You Free" and "Route 66," but neither charted locally; guitarist Galen Niles replaced Turner in time for the Outcasts' swan song, the 1967 Gallant label single "1523 Blair." So titled after the street address of the studio owned by producer Leland Rogers (the brother of country superstar Kenny Rogers), "1523 Blair" is Texas psychedelia at its finest, but like its predecessors, it failed to make a commercial impact on its initial release. Drug and alcohol problems also contributed to the Outcasts calling it quits in 1968.
Posted by: D&J на 22:32