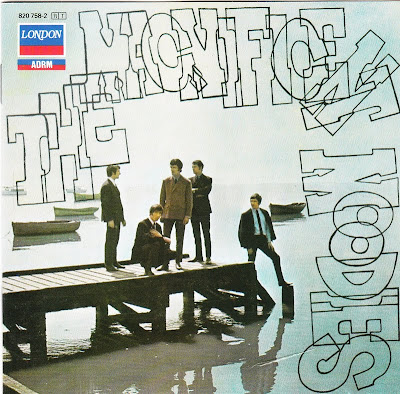 Although they're best known today for their lush, lyrically and musically profound (some would say bombastic) psychedelic-era albums, the Moody Blues started out as one of the better R&B-based combos of the British Invasion. The group's history began in Birmingham, England with Ray Thomas (harmonica, vocals) and Mike Pinder (keyboards, vocals), who had played together in El Riot & the Rebels and the Krew Cats. They began recruiting members of some of the best rival groups working in Birmingham, including Denny Laine (vocals, guitar), Graeme Edge (drums), and Clint Warwick (bass, vocals).

The Moody Blues, as they came to be known, made their debut in Birmingham in May of 1964, and quickly earned the notice and later the services of manager Tony Secunda. A major tour was quickly booked, and the band landed an engagement at the Marquee Club, which resulted in a contract with England's Decca Records less than six months after their formation. The group's first single, "Steal Your Heart Away," released in September of 1964, didn't touch the British charts. But their second single, "Go Now," released in November of 1964 -- a cover of a nearly identical American single by R&B singer Bessie Banks, heavily featuring Laine's mournful lead vocal -- fulfilled every expectation and more, reaching number one in England and earning them a berth in some of the nation's top performing venues (including the New Musical Express Poll Winners Concert, appearing with some of the top acts of the period); its number ten chart placement in America also earned them a place as a support act for the Beatles on one tour, and the release of a follow-up LP (Magnificent Moodies in England, Go Now in America) on both sides of the Atlantic.
MORE: 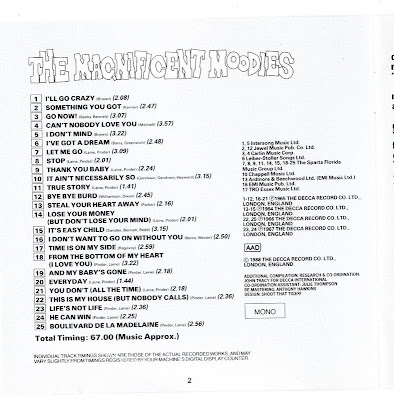 The pre-psychedelic Moody Blues were represented in England by this album, which is steeped in American soul. The covers include songs by James Brown, Willie Dixon, and Chris Kenner, plus the chart-busting "Go Now" (originally recorded by Bessie Banks), interspersed with a brace of originals by lead singer/guitarist Denny Laine and keyboardist Mike Pinder, and one Jeff Barry/Ellie Greenwich number, "I've Got a Dream." The shouters, like "I'll Go Crazy" and "Bye Bye Bird," will be the big surprises, showcasing the rawest sound by the group, but "I've Got a Dream" shows a lyrical, harmony-based sound that is vaguely reminiscent of the Four Tops (which is ironic, as that group later cut a single of the latter-day Moody Blues original "So Deep Within You"), while "Thank You Baby," a Laine/Pinder original, offers them doing a smooth, dance-oriented number with some catchy hooks. The group's sound is good and loud, and Laine was a phenomenal singer, though the band lacked the charisma and built-in excitement of such rivals as the Rolling Stones and the Animals. This album is more interesting than its American equivalent, but also not as good, since it leaves off such single sides as "Steal Your Heart Away" and the Pinder/Laine "From the Bottom of My Heart," the latter being the best side this version of the group ever recorded.
EP 65's - GO NOW 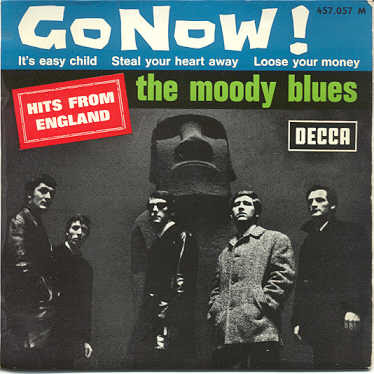