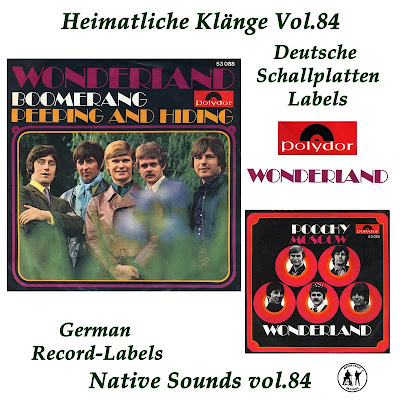 This was a beat band formed at the beginning of 1968. Reichel and Tarrach had previously been members of the most famous German beat band: The Rattles. Wonderland recorded three singles before Humphries and Franke quit at the end of 1969, to be replaced by Kalle Trapp and Claus-Robert Kruse. One year and a single later the band ceased its activities, with Reichel and Dostal teaming up for the Wonderland Band album, to which Franke, Tarrach, Trapp and Kruse all contributed. All Wonderland singles and four tracks for a projected album were collected in 1973 on a Karusell sampler....

WONDERLAND BAND - One of Achim Reichel's strangest projects occurred in l97l, after the demise of Wonderland. His long time collaborator Frank Dostal followed him from this band. Together they recorded as Frankie Dymon Jr. as well as the very different Wonderland Band, whose album was an ambitious production featuring 25 guest musicians, among them Clauk-Robert Kruse (guitar, organ, vocals, arrangements), Helmut Franke (guitar), Ladi Geissler (guitar), Hans-Uwe Remers (piano, arrangements), Benny Bendorf (bass), Hans Hartmann (bass), Kalle Trapp (bass), Joe Nay (drums), Barry Reeves (drums) and Dicky Tarrach (drums, chimes, trumpets and trombones). The results sounded close to the eclectic solo album Die Grune Reise, but Reichel's echo guitars were in this case replaced by solid doses of brass! Wonderland Band's No. 1 was equally weird with boogie rock, vintage glitter rock and folky ballads spiced with incredibly strange brass arrangements. It was hardly a great success (however, there are highlights!) and proved to be a one-off, although a 1972 single featured two unreleased tracks: "Rock'n'Roll People" coupled with "King Of America"
Summer 2001 saw the arrival in the US of the 4-CD box “Nuggets II – Original Artyfacts From The British Empire And Beyond 1964-1969”. The compilers of these American garage punk, mod and psychedelic compilations had either only very limited transatlantic knowledge or suffered from a severe hearing disorder. How else would you explain that a song called “Moscow” – perhaps the most accomplished international-standard composition from the 1960s which ever left a German pressing plant – was missing from the total of 109 tracks? Responsible for this title: WONDERLAND and their producer, James Last.
The years 1967 and 1968 were a turning point for the international pop music scene. The Summer of Love had left its mark (or perhaps had only become possible thanks to those new sounds): flowers in people’s hair and San Francisco; small concept pieces such as “Grocer Jack” and the nasal “Pearly Spencer”; choirs crooning their “aaahs” and “ooohs”, phasing, little bells, plus a lot of ringing words – no more room for the rumbling 437th version of “Hippy Hippy Shake”, “Boom Boom” and “Bye Bye Johnny”, new ideas were called for....
MORE info  included into archive's RTF file
Heimatliche Klaenge - Deutsche Schallplatten-Labels
Native Sounds - German Record-Labels
vol.84
POLYDOR
The Wonderland
01 - Poochy
02 - Moscow
03 - Boomerang
04 - Peeping And Hiding
05 - Count Down
06 - Jump Anna Trampaleen
07 - Mama (Polydor Anniversary Lp)
08 - Gas Ballon
09 - Try To Be What You Are
10 - Do You Remember
11 - Burdon
12 - On My Way (To The USA)
13 - Teachers And Preachers
14 - Hey Willy
15 - Mighty Pudding
16 - I Make Music
17 - Heya Donna Leya
18 - Rock 'n Roll People
19 - King Of America
20 - Laugh Story
21 - What A Day
01 - 13 Wonderland
07 -    with James Last (from Polydor Anniversary Lp)
14 - 15 Hamburger Blues-"Gesang"-Verein von 1970 N.E.V.
16 - 19 Wonderland Band
20 - 21 The Gorillas
mp3 lame VBR -V0 extreme
Lp Wonderland Band No. 1
http://allmusic-wingsofdream.blogspot.com/2010/11/wonderland-wonderland-band-no-1-1971.html
Posted by: D&J на 13:48