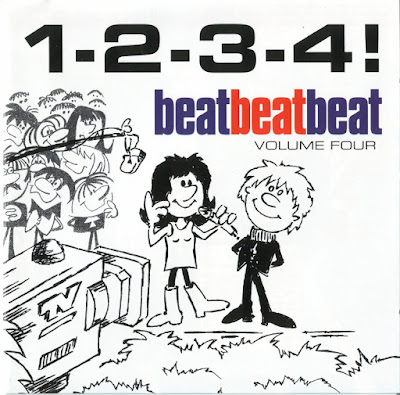 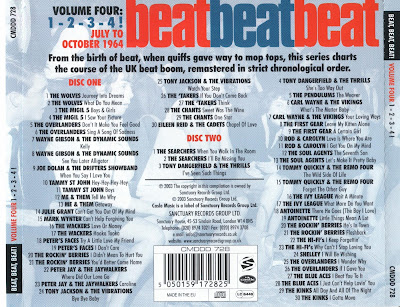 Castle's Beat, Beat, Beat series is an exhaustive look at the British beat group movement of the early to mid-'60s. Vol. 4 covers the period from July to October of 1964, and gathers up groups big (the Kinks, the Searchers), small (the Rockin' Berries, the Ivy League), and obscure (just about everybody else). More than a history of the groups, it is a history of the evolution of a sound, the innocent and usually exuberant sound of the post-Beatles pop explosion. The best songs are by the two bands that made it to the big time: The two Kinks (the justifiably classic "All Day and All of the Night," the oft-overlooked rocker "I Gotta Move") and Searchers (the incredible "When You Walk in the Room" and "I'll Be Missing You") songs stand head and shoulders above the rest of the disc. Still, there are some fine tracks to be found, like the Overlanders' "Don't It Make You Feel Good," the Wackers' dramatic "Love or Money," Tony Jackson's fine "Bye Bye Baby," the Rockin' Berries' great Four Seasons tribute "He's in Town," the First Gear's rip-roaring "Leave My Kitten Alone" (featuring some wild guitar work by a very young Jimmy Page), Tommy Quickly & the Remo 4's folk-rock-anticipating cover of country nugget "The Wild Side of Life," the Ivy League's epic ballad "What More Do You Want," and Rod & Carolyn's chiming beat ballad "Love Is Where You Are." Wedged in among all the boy bands are a few tracks by the girls, and they are mostly pretty good too; Tammy St. John's unhinged takes on "Hey-Hey-Hey-Hey" and "Boys" are breathtaking and have to be heard to be believed, and Julie Grant's bona fide girl group-sounding "Can't Get You Out of My Mind," and, best of all, Antoinette's two tracks, "There He Goes (The Boy I Love)" and "Little Things Mean a Lot" are as good as any girl group tracks coming out of the U.S.A. at the time. It's a pity that no one from the Brill Building snapped her up and brought her to the States. The rest of the disc is pleasant pop with lots of melody and moxie, but one can see why (apart from a few exceptions like Antoinette and the Ivy League) most of the groups here remained obscure. Beat, Beat, Beat, Vol. 4 is certainly worthwhile as a historical document, but if it had been whittled down to one disc it would have been a better listening experience.