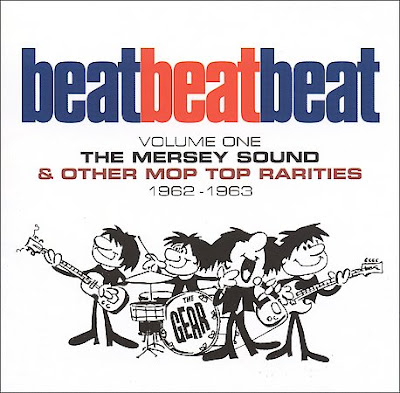 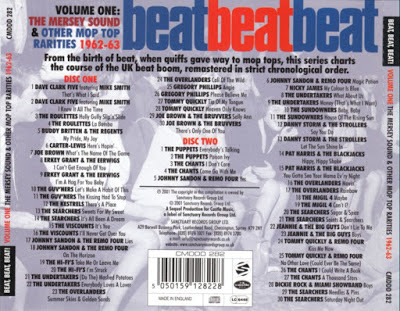 In the early 1960s, there were three major record companies: EMI, Decca, and Pye. When the Fab Four hit pay dirt in 1963, the first of these companies hoovered up Gerry and the Pacemakers, The Dave Clark Five, The Hollies, and Cilla Black, artists that all sold lorry loads of singles. In an attempt to duplicate that success (and no one knew how long things would last - a few singles and an LP was the normal life span), Pye, and it's subsidiary labels, went north then east, west and south in an attempt to unearth some gems of their own. This collection tells you that, with one exception, they failed miserably.

Everything here was recorded or released in the 18 months between June '62 and December '63. Joe Brown had some success, but it was The Searchers who were the main contributor to the coffers whilst The Dave Clark Five jumped ship to Columbia and mega sales. The rest of the artists featured here are just a footnote in the annals of British Beat. The reason being, everything sounds the same. It's as if there was a bucket out from which you pulled ready-made backing and added your own voices over the top.

The majority of vocals are weak and hearing the backing vocals makes you appreciate just how fine John, Paul and George were in that department. Many groups seemed not to be able to decide on a lead singer, so all had a go - all at the same time! Whilst The Beatles looked good and had the personalities to match, you can tell The Puppets (who sound like Pinky and Perky on `Poison Ivy`), Buddy Britten & The Regents, Tommy Quickly, Pat Harris & The Blackjacks, and Gregory Phillips amongst many were being told what to sing and how to sing it. The songs themselves don't do anything to enhance anyone's reputation - The Searchers excluded - with the worst thing Lennon/McCartney ever wrote stopping Tommy Quickly's career there and then. Mind you, if you can't sing, it doesn't matter how good the song is, and very few here can. That's why it didn't work and Pye suffered as a result. (The Beatles would have experienced the same ignominy had they signed with the label.)

That isn't to suggest that this isn't worth getting. The Kestrels' working of `There's a Place' is a missed soul classic, the aforementioned Pat Harris sounds as if she's having a pretty good time whilst Jeannie & The Big Guys take on `Boys' at 150mph. If you're a student of the era, this is a `must have', as it's the only place you'll be able to find most of the 60 tracks. Yes, they all came out on singles but buying them isn't the issue, though they`ll be expensive; it's finding them. (Downloads aren't counted as collecting.) It doesn't end there, though. Many people associated with the groups on this went on to far bigger and greater things. The foldout inlay is informative with some nice photos. It's quaint.