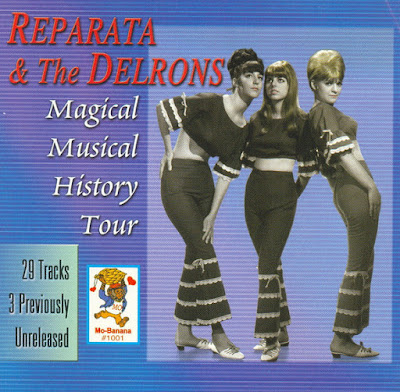 Reparata And The Delrons, formed in the early 1960s when they were still at Catholic school in Brooklyn, NY, USA. The trio released their crowning glory, 'I'm Nobody's Baby Now', in 1966. 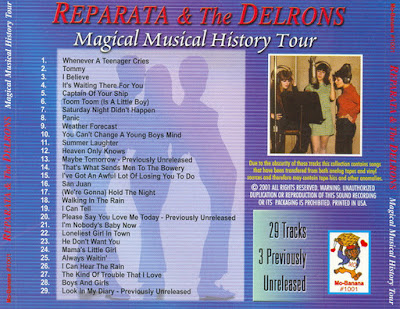 Reparata & the Delrons' legacy has been poorly represented on CD, no label taking on the challenging task of drawing from a body of 1960s recordings that were strewn across several different labels. The absence of a cross-licensed compilation left a gap to be exploited by this almost certainly unauthorized anthology, whose 29 tracks include work they cut for the World Artists, RCA, Kapp, and Mala labels (with, fear not, their hits "Whenever a Teenager Cries" and "Captain of Your Ship"). It's something of a travelogue of mid- to late-'60s girl group styles, sung by a trio who were good but not great, and never got ahold of material on par with the best classics by the Dixie Cups or the Shangri-Las. It's certainly the Dixie Cups they were emulating, with fairly successful results, on "Whenever a Teenager Cries" and some of the earlier sides here. However, they also went into Motown-influenced New York pop-soul, mainstream pop/rock ballads (the melancholy "Summer Laughter" is a highlight in that regard), bad novelty humor ("That's What Sends Men to the Bowery"), tropical-infested easy listening ("San Juan"), Shangri-Las-type voice-overs ("I Can Tell"), the Spectorian Ronettes-like "I'm Nobody's Baby Now," and even, on "Saturday Night Didn't Happen," a bit of psychedelic pop. It's not great, and not ingrained with as much character as the truly excellent girl groups had, though it's worth hearing by serious fans of the style. The packaging leaves much to be desired, though, lacking any liner notes or information as to the original dates and labels of release, though it does have a few photos and record sleeve/ad reproductions. In addition, much if not all of this has been transferred from vinyl sources (though at least a small-print note on the back admits this), and even when surface noise can't be heard, it lacks the sonic depth that would be expected of a legitimate reissue, though the fidelity isn't poor. Note that three of the songs -- "Please Say You Love Me Today," "Look in My Diary," and "Maybe Tomorrow" -- are identified as "previously unreleased," though of course there aren't any details as to when they were recorded.