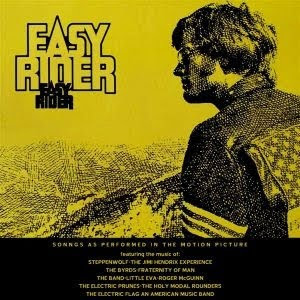 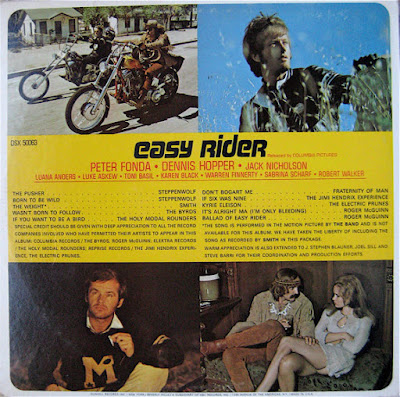 Easy Rider was the surprise box-office hit of the summer of 1969, a low-budget film about a couple of hippies who use their profits from a drug deal to drive their motorcycles across the Southwest and attend New Orleans' Mardi Gras celebrations, encountering adventures and tragedy along the way. It turned out to be a telling portrait of America's cultural divide in the late '60s, and no small part of its impact was the soundtrack music, which eschewed a traditional score (the filmmakers couldn't have afforded that, anyway) in favor of rock music. Even then, director Dennis Hopper didn't have much special music written, instead mostly using songs he'd heard on the radio in 1968 while he was editing the film. (In the liner notes to the 2000 CD reissue, Hopper claims that he canceled a proposed Crosby, Stills, Nash & Young score when he became enamored with his own selections; other accounts claim the film studio insisted on the music used in the rough cut.)

So, the film's music consisted of such 1968 rock radio favorites as Steppenwolf's "The Pusher" and "Born to Be Wild," the Band's "The Weight," the Byrds' "Wasn't Born to Follow," and the Jimi Hendrix Experience's "If Six Was Nine," with such humorous changes of pace as the Holy Modal Rounders' cosmic folk song "If You Want to Be a Bird" and Fraternity of Man's marijuana-smoking behavior guide "Don't Bogart Me." Hopper had little trouble persuading various record labels to grant the screen rights to these songs at a time when re-used rock wasn't heard much in movies. Roger McGuinn, making his solo performing debut, contributed new recordings of Bob Dylan's "It's Alright Ma (I'm Only Bleeding)" and his own specially written "Ballad of Easy Rider," actually co-written with Dylan, who was not credited.

When Easy Rider became a successful film upon release, a decision was made to release a soundtrack album, and most labels agreed to license their tracks to Dunhill/ABC. Only Capitol Records held out, so the Band's version of "The Weight" was replaced by a near-copy recorded by Dunhill act Smith. The soundtrack album also featured some dialogue and sound effects from the film. The result was a commercial bonanza: The album reached the Top Ten and went gold, becoming the second most successful soundtrack LP of the year, after the Nino Rota score to Romeo and Juliet. Just as the film transformed values in Hollywood, the soundtrack album helped give birth to a new business in which soundtrack albums became collections of various pop songs that sometimes out-grossed the films with which they were associated.

Its very success ironically doomed the availability of the Easy Rider soundtrack album, however. By the CD era, the various labels that controlled the songs were no longer happy to license their material, and the album went out of print, although a CD was issued overseas in 1993. Finally, on June 13, 2000, MCA managed to bring the Easy Rider soundtrack album back into print in the U.S. Thirty-one years later, it still sounded like a good thematic collection, reflecting the film's values of drug use and open-road freedom. Songs like "Born to Be Wild" and "The Weight" had long-since been enshrined as rock classics, and the lighter material continued to amuse, confirming Easy Rider as both a historical document and an entertaining listen, especially to those who knew the film.