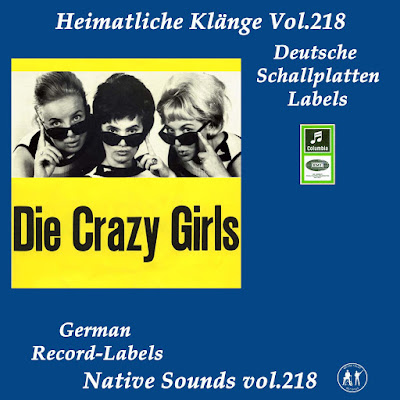 In the early 1960s, in the wake of Beatlemania, a lot of ensembles called "Gesang-Gruppen" appeared among the performers of hits in the FRG - singing teams, among which there were many original artists, whose singing style is easy to recognize and distinguish from the rest. These groups included Die Crazy Girls. On the musical Olympus of the country, they did not exist for long - from 1963 to 1965.
The three members of the group - Rosie Rohr, Gretel Kästel  (Wünsch) and Anns Plevier met in the early 1960s as members of the Boto Lucas choir, whose hit "Berliner Polka" appeared on Columbia Records. 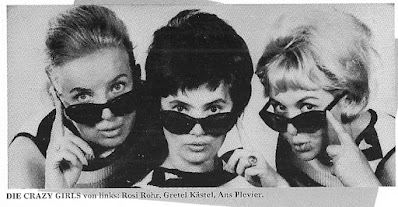 However, before that, the "crazy girls" managed to do something. Rosie Rohr began her career in 1949 performing music for operettas, and in 1961 she co-founded the Günter Kallmann Chor. In 1965, after the Crazy Girls disbanded, she founded her own vocal ensemble, Die Rosy Singers.
https://www.discogs.com/artist/468282-Rosi-Rohr
Gretel Kästel recorded records in the groups Das Duo Rosner, Das Trio Rosyann, until a certain time was in the shadow of the fame of her husband Karlheinz Kästel, composer, guitarist and orchestra leader.
https://www.discogs.com/artist/3269988-Greta-K%C3%A4stel
The third member of the ensemble, a singer from Holland Anns Plevier began recording in 1954 and immediately hit the charts with the song "Leen me nog een kusje". At home, she performed jazz standards, but after moving to Hamburg, her name became associated with the German schlager. After participating in the choirs of Boto Lucas and Gunter Kalmann, he took part in the Crazy Girls, then in the project of the famous singer Henry Valentino.
https://www.discogs.com/artist/4692410-Ann-Plevier
Slater singer and pianist Paul Kuhn was collecting young talent at the time under Columbia Records, and so he teamed up with the Dutch band The Javalins, which he produced. The bands together recorded the 1963 single "Hey Hey Ha Ha" and a cover version of Dwayne Eddy's "Dancing to the Guitar" on side B, which was released in Germany, the Netherlands and the United States. The second single from both groups appeared the following year.
The first record without the Javalins came in 1965 and was a cover of Johnny Smith's Walk-don't Run, which charted several times in previous years in The Ventures. On the B side, there was a song called No Words Slop. In the same year, two more singles appeared, including a cover-version of the song of the group "Shangri-Las" - Leader of the pack, which has successfully passed the world charts.
After the dissolution of Crazy Girls, Rosie Rohr joined the Gunther Kalmann choir, while Gretel Kestel and Anse Plevier began solo projects.
https://de.wikipedia.org/wiki/Die_Crazy_Girls 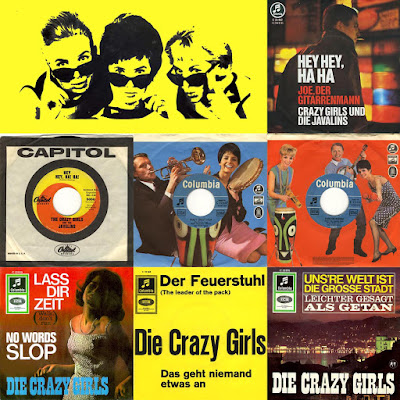 07 - Der Feuerstuhl (Leader Of The Pack)