The Wailers - Wailers Wailers Everywhere/Out of Our Tree 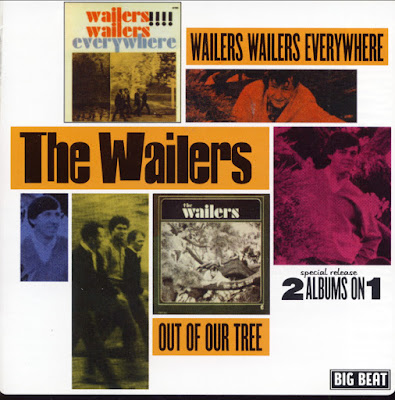 This is the definitive retrospective of the Wailers' mid-'60s output for Etiquette, including not just the two albums that comprise the title of this single-disc CD reissue, but also five non-LP bonus tracks. This was a time that found the Wailers adjusting awkwardly to the changes wrought by the British Invasion, placing far more emphasis on vocal numbers and original material, with mixed results. For Wailers Wailers Everywhere, their first LP recorded after the onset of the British Invasion, the group members wrote most of the songs themselves. It was a change from previous Wailers efforts, as the sound usually reflected the influences of the Beatles and other early British Invasion stars like the Dave Clark Five, as well as some of the harmony rock of the Beach Boys and the Four Seasons. This was a farsighted strategy as far as career survival went, but fell down on its shortage of good original songs. For the most part it had tepid British Invasion-like harmony rockers, sounding very much like strained attempts to adapt their R&B-frat rock sound to the new wave, yet without the full chunky power of their early-'60s records. Out of Our Tree, the Wailers' final album for Etiquette, was a somewhat confused effort. It was torn between covers of mid-'60s hits and original material, usually in their R&B-soaked raunchy style, though with touches of influences from British Invasion groups and the emerging American garage rock scene. Certainly its highlight was the title track (eventually included on the Nuggets box set), with its grinding sub-"Satisfaction" riff. But other original numbers on the record were frenetic yet undistinguished rewrites of '50s-style rock & roll numbers, though "Hang Up" was a pretty fair tough garage rocker. And there were too many covers of well-known hits -- "Hang on Sloopy," the Beatles' "I'm Down," "Unchained Melody," "Mercy Mercy," "Summertime" -- that neither matched better-known prior versions or added much to them, though the screaming white-soul vocal on Hank Ballard's "Little Sister" is pretty harrowing. If the whole album had been on the level of "Out of Our Tree" and "Hang Up," this would be a notable slice of wired, edgy mid-'60s garage rock, but too much of the rest disappoints. Four of the five bonus tracks are group originals from non-LP singles of the era, ranging from fairly taut R&B-rock originals ("You Weren't Using Your Head") to the Beach Boys-influenced "All My Nights, All My Days," though like much of the band's material, the rougher songs rely too heavily on stock menacing R&B riffs. The remaining bonus track, the Little Richard-style "Livewire," made its first appearance on a Norton release a few years before this release. 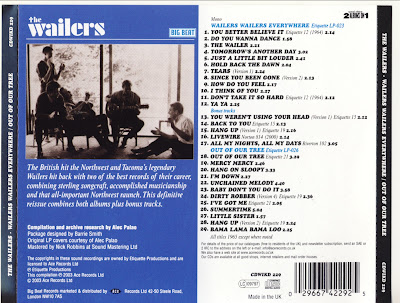