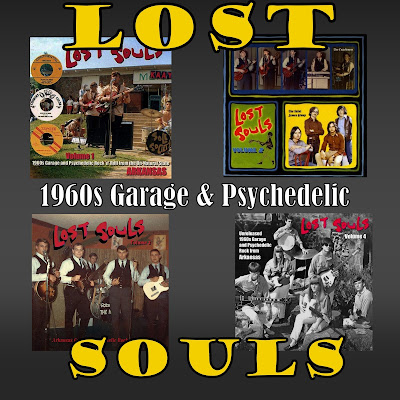 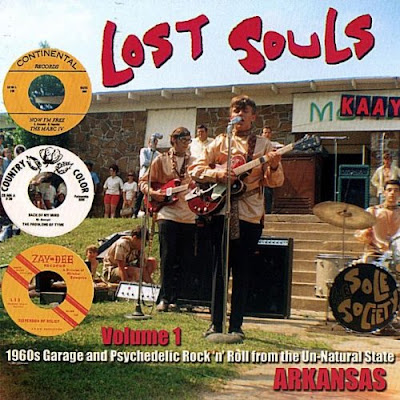 From the depths of the most rural parts of Arkansas emerges a wild collection of garage and psychedelic unknowns. & Lost Souls, Volume 1 is full of cryptic killers and psychedelic cycles from custom labels and obscurities of Arkansas, many of which never landed outside of the town where they originated. They all share a unique sound that comes from being isolated in rural communities yet brimming with teen abandon. The liner notes are filled with detailed exclusive info on The Lost Souls, Sole Society, Purple Canteen, and more will aim to please for the curious listener.
Review
Now another rope ladder descent into the bottomless pit that appears to be the U.S. sixties / seventies garage psych scene. The Lost Souls (Vol. 1) CD compilation curated by musician and record collector Harold Ott would immediately suggest that its release was the culmination of countless hours of burning the midnight oil, when eating and sleeping (and other essentials) fell by the wayside in deference to making an absorbing trawl through the musical heritage of Arkansas. These reactivated 45s, acetates and master tapes, 29 in all, are thoughtfully sequenced in chronological order and detail the bratty ripostes, and, in time, the more weirded out responses made to the then booming British invasion. When it comes down to influences and innocent ghosting, a good percentage seem to acknowledge Them in favour of Stonesy swagger and Zombies-esque sensitivity, witness The Yardleys, Barefacts, the excellent Xciters with Upsetter and the edgy delivery of Gene Burnett on Hey Come On Now . However for me, the more interesting combos look to their own. The Shades (featuring Bob Fly) offer a sublime moment in Young Rascals-shaded white soul in Hit It . L.D. Mitchell and The Amalgated Taxi Cab Service s plea for racial harmony ( Planet of Union ) is a Doorsy mid-pacer, less portentous and doomy than those other Jimboclones Phantom s Divine Comedy. Amps are turned to eleven with Blackfoot s Bummed Out , an embryonic hard rock / psych crossover where Steppenwolf are put in a blender with the Damnation of Adam Blessing. As for the weirdest thing , well it just has to be LSD by the Suspension of Belief. A stream of consciousness infused folk rock exploitation disc in which the producer, a man out of his time, dropped in recordings of a female opera singer at timely moments. A low tech precursor to sample culture? Maybe! As a number of US /Euro comps I ve chanced upon recently have a just make do policy no sleevenotes, smudgy band and label pics ...Souls comes as a clunker-free breath of fresh air and clearly goes that extra garage mile in the research department. --Terrascope Online
Brilliantly researched batch of small town sounds There are plenty of surprises lurking in this inspirational debut comp from the Arkansas-based and unashamedly Arkansas-centric Psych Of The South label. Covering 1965-71, the spread of grooves includes the inevitable garage and Brit Invasion, psych and prog soundalikes, but because researcher/curator Harold Ott's focus is so obsessively narrow, he s also turned up some wildly eccentric local variations on 45, acetate and original master tape. Witness the strangely funky garage-country sound of Trouble Bros Your Love Is Gone, Supension Of Disbelief s LSD, complete with their svengali s random postproduction opera samples, and future preacher LD Mitchell s insistent message of brotherly love in Planet Of Union. The sleeve picture of would-be weirdoes The Sole Society playing a Saturday afternoon gig outside the K-Mart is priceless; likewise the love and intimacy poured into Ott s booklet notes, including highs such as the garage-a-billy Roustabouts, house band at the now defunct Lil Abner theme park in Little Rock . Like Harold says, This puppy moves. Psych Of The South | 4501 Reviewed by Derek Hammond --Record Collector Magazine
Just when you thought every single thread of music from the past has been resurrected in digital form, a package such as this surfaces. And that's a good thing because folks like us can never get enough of the stuff. While there's no shortage of compilation albums centering on particular regions of the world, Arkansas is one state that hasn't been examined much at all, so Lost Souls is indeed a welcome release. A fair share of these bands are captured straddling the transition between frat rock and British Invasion sounds, resulting in a string of crude yet awfully charming tunes. Strands of soul and funk music also tend to crop up in the sessions, but for the most part, the record as its subtitle proclaims, salutes the gritty garage punk racket and trippy psychedelic sensations we all know and love. Among the joys heard on Lost Souls are Upsetter by The Xciters, The Problem of Tyme's Back Of My Mind, The Blue and Gray's rendition of Don't Bring Me No Flowers, which was initially laid to vinyl by The Gentrys, Even Though It's Wrong from Michael Troy and The Pharaohs, and The Light Won't Shine by The Yardleys. Shuffling grooves, choppy guitars, snotty vocals, trashy drumming and squeaky organ passages rule the turf. Seated in the freaky corner of the room, there's Blackfoot's Bummed Out, Purple Canteen's Brains In My Feet and Mystic Illusion's Colour Of My Daye. As the sixties stomped on, the music encountered many dramatic changes, which are firmly illustrated on Lost Souls, where the energy is contagious and the possibilities are boundless. RECORD REVIEWS BY BEVERLY PATERSON (May 2008) --Twist And Shake Magazine 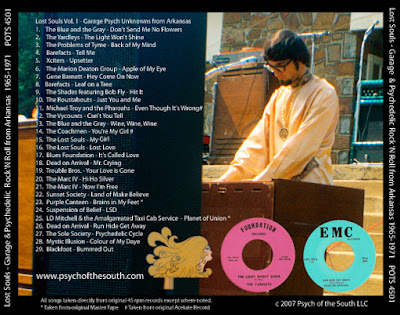 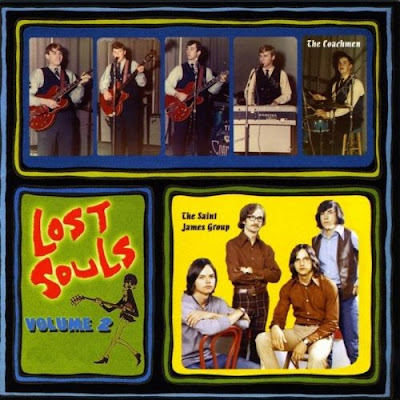 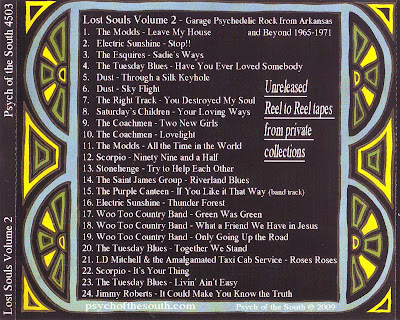 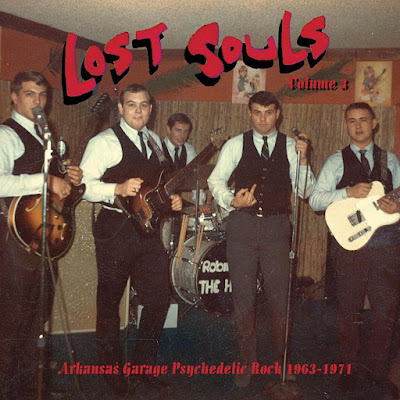 Obscure sub-underground garage and psych bands from the state of Arkansas back in the day. Couldn't help but to notice some of these unknown bands were covering classics by (already) established artists - however, keep in mind this CD is every bit as great as it's other three volumes. Couldn't get enough of the superb opener Richard Vanover & Bob Ralph "I Can See Your Ways", the simply out-standing The Villager's "Empty Heart", a solo artist - Jamie Holmes covering Them's smash hit "Gloria", Red Light Funnies covering Love's "My Little Red Book", "Mr. Flying Saucer Man" by Jimmy Ford & The Luzers, Harold Morgan's awesome "White Lightning" of which I'm sure that at one time was likely a highly sought-after vinyl 45 single and the should've been a worldwide hit The Five Vogues' "Wait And See". Also enjoyed the (almost) Doo-Wop-like The Saber's "I'll Fly High", the Lemon Meat covering Love's "Signed D.C." along with two bands giving a new life to a couple of Jimi Hendrix tunes - Wet Dream (have to wonder why this band never got airplay) on "Fire" and Scorpio with a rocking spin on "Hey Joe". A must-have. ~ Mike Reed. 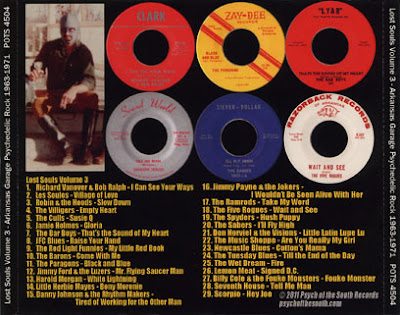 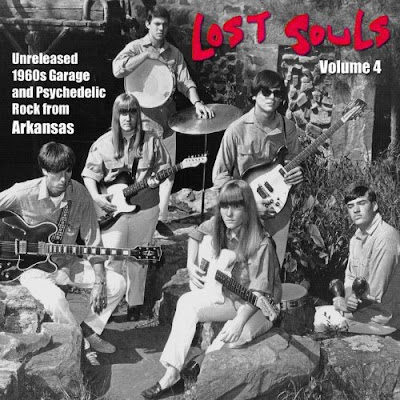 Another must-own compilation CD of off-the-radar psychedelic and garage bands from the state of Arkansas in the '60's that (obviously) never got off the ground. From 1965 to 1968 to be more precise. Many of these bands are being heard for the very first time by the general public. Most of these tracks were faithfully preserved on reel-to-reel tapes. Vipers give us five (5) songs to groove to on this disc, as I got a lot out of the four rocking tunes that the Federal Union has here and the somewhat familiar Loved Ones has two tracks on 'Volume 4' for your listening pleasure. The Barons (who I've read about before, maybe it was a copy of Shindig magazine) has two songs here as I was also digging the single cut this CD had by The Coachman, Steppendog and The Villagers. Almost forgot to mention the must-hear pair of audio goods there are from the Stepin' Stones. If you like various artists discs - as I usually do - then you'll love 'Lost Souls, Volume 4'. Also available on vinyl lp - but do keep in mind that on the vinyl edition, you get 14 of the 22 songs. Essential.~ Mike Reed 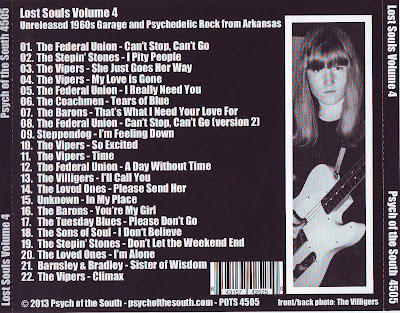