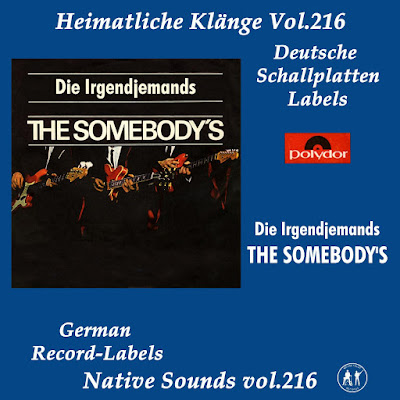 216 Heimatliche Klaenge - Native Sounds
Die Irgendjemands - The Somebody's
Polydor released one single and three more recordings tracks "The Somebody's" on different Polydor samplers, as well as the single with Tanya Day.
For many British bands performing in Hamburg at the time, the working hours were long and the conditions were tough, but the long hours on stage formed a whole out of them. If the bands then when they returned to England, they were considered very competent and as such several opened up to them
opportunities to accompany established artists or even make it big on your own.
In mid-1964, Tanya Day, who is now accompanied by the British group "The Nu-Notes", offers the possibility to record a record. The German Polydor label was keen on the British market gaining a foothold and engaging both established and new artists. Tanya Day in Hamburg was now very active and made a name for itself, the Polydor came into focus. She got one contract for a single. A title from the Shirelles was chosen for the A-side - His Lips Get In The Way (Helen
Miller & Howard Greenfield) and for the B-side I Get So Lonely (Pat Ballard), already 1954 by The Four Knights released. And now the accompanying musicians or accompanying arrangements come into play.
For the a-side of the single, an orchestra is given as accompaniment. For the B-side a group called "The Somebody's", in German "Die Irgendjemands". For the German single, the spelling is on the label "The Somebodies". But let's agree on "The Somebody's". As is known from multiple sources, Tanya Day was accompanied on the b-side by The Nu-Notes. So "The Somebody's" are "The Nu-Notes". With the "Nu-Notes", however, the line-up changed frequently. So somebody's always played here. Hence the naming by the Polydor in "The Somebody's", who knows ?! The fact is that Ritchie Blackmore was also on board for "The Nu-Notes" at that time. Tanya Day and Blackmore already knew each other from the old Midlands times and Blackmore also liked to take the opportunity to be present at recordings in addition to his live performances and sessions. So it's not surprising that Ritchie Blackmore plays the lead guitar on the b-side I Get So Lonely. Read about Ritchie Blackmore in the book Black Night by Jerry Bloom. But this is presented differently in other sources. It says Blackmore would play on the a-side. And to make the confusion complete, there are sources that claim that Roger Dean (also with "The Nu-Notes", later John Mayall's Bluesbreakers) plays the guitar on one side. Anyway, Blackmore was there, and most likely on the b-side. Who the other somebody's / Die Irgendjemands was at the time could not be clarified.
01 - Needles And Pins
02 - Tico Tico
03 - Sleep Walk
04 - Tallahassie Lassie
05 - Sweet Nothin's
06 - His Lips Get In The Way
07 - I Get So Lonely 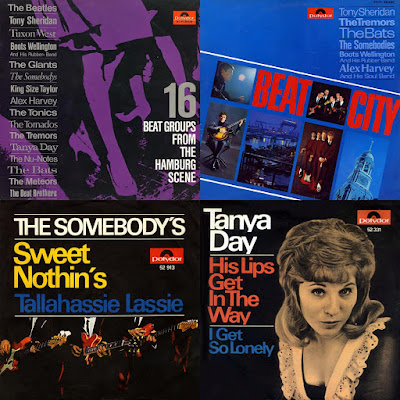