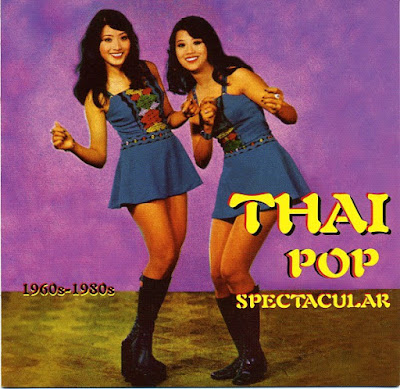 The Sublime Frequencies label specializes in music from faraway places, like the ethnographic studies of Folk Music of the Sahel and the cheesy exotic pop of the newly reissued compilation Thai Pop Spectacular. This consistently entertaining album spans three decades, from funky soundtracks to ’60s Thai films to music influenced by the disco era. It’s an excellent mix, but an incomplete document. The label’s more ethnographically-minded releases include liner notes that place each track in its cultural context, but the notes to Thai Pop Spectacular are skimpy, and while song titles are translated, lyrics are not. Em Records’ Dao Bandon set includes a crash course in Thai pop subgenres that would have been helpful navigating this set, but even without context, the music hits a groove so undeniable that it inspired my wife to dance immediately upon finding me listening to it in the study.

The album’s performers are prone to comically exaggerated vocals backed by soulful horn charts and funky rhythms in a marriage of East and West that successfully integrates cultures for a hybrid that communicates something universal. Like drinking. The vocals of Plearn Promdan’s “Lung Dee Kee Mao (Uncle Dee Is A Drunk)” sound like comedy, but the horns and rhythm section make it compellingly funky, with a startling spoken-word coda. Johnny Guitar’s “Fawn Ngeo (Dance of the Ngeo)” comes from ethnic northern Thai of Burmese descent; the instrumental alternates the same riff between traditional percussion and ‘60`s surf guitar. “Kwuan Tai Duew Luk Puen (You Should Die By Bullets)” sounds like it comes from a ’70s Bollywood action movie, with driving drums and a pulsing discofied beat under vocals by female singer Chailai Chaiyata.

The exaggerated vocals of “Gang Geng Nai Krai Lab (Look Whose Underwear Is Showing)” by Kabuan Garn Yor Yod Yung Yong mark it as another comic song, but there’s a great drum and bass break that DJs will drool over, especially with the excellent, bass-friendly sound on the vinyl edition of the album. The album ends with “Pleng Show,” Chalermpon Malakum’s frenetic keyboard and electric guitar version of “Aie A Mwana.” But the album’s centerpiece may well be Pairoj’s “Khor Tan Gor Mee Hua Jai (The Beggar Has A Heart),” a wild cover of “The Night Chicago Died,” its over-the-top male vocals delivering a level of agita unimaginable in Paper Lace’s musical vision.

As entertaining as the album is, just a little bit of digging uncovers sometimes heartbreaking context. One of the best tracks on the album comes from singer Pumpuang Duangjan. Her performance of “Sao Dok Kum Tai (Lady From A Flower)” is poignant even if you don’t know her story, but since the notes don’t deign to tell it to you, I will. Nicknamed Pueng, she was a soulful singer/actress who was a pioneer of luk thung, a Thai pop subgenre that originated in poor, rural areas. Pueng brought electronic instrumentation to luk thung in the ‘80s and was a huge success, so much so that she’s the subject of a recent Thai biopic. But her success did not bring her happiness; she was exploited by managers and love interests who left her so destitute that she couldn’t afford to be treated for the lupus that killed her at the tragically young age of 30.

Thai Pop Spectacular was originally released in 2007 on a now out of print CD, but Sublime Frequencies pressed a vinyl reissue for Record Store Day. This new edition is limited to 1000 copies, but you can still pick it up without paying a premium, and with an hour of music split over four vinyl sides, it sounds loud and rich and better than its digital equivalent. This is an essential set for fans of the label and of Asian pop, but it loses points for skimpy notes. Consumers are encouraged to pick up the album and go down the rabbit hole searching for as much English-language information you can find – hell, ask the staff at your favorite Thai restaurant about these artists. You’ll probably hear plenty of stories that will enhance your appreciation for this music even more.

A5 –Johnny Guitar Fawn Ngeo (Dance Of The Ngeo) 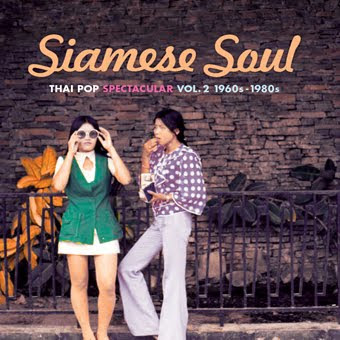 Sublime Frequencies offers another fascinating look into Thailand's pop music scene in this sequel to their excellent 2007 collection Thai Pop Spectacular. While the title Siamese Soul might promise just a bit more dance fever than this set delivers, funky and soulful grooves dominate many of these15 tunes, though when Thai melodic structures and vocal stylings are married to the more rigid frameworks of western rock & roll played on guitars and keyboards, you get something that's decidedly more than the sum of its cross-cultural parts. As Kwan Jai and Kwan Jit Sriprajan push the narrative of "E-Saew Tam Punha Huajai" with verse after verse, the cyclical framework gives the music a psychedelic texture that's almost hypnotic, while Roong Petch Laem Sing's "Kob Kanong Fon" marries a rhythm reminiscent of James Brown to a tune punctuated by the weirdest simulated frog croaking preserved by modern recording technology. One can hear stripped-down flashes of Afro-beat in "Fon Tok Leaw" amidst Chutima Duang Porn's emphatic vocals, and even ballads like Group: Ubon Pattana's "Lam Sarawan" bubble with an intense emotional energy that sets this music apart from its western counterparts. If the microtonal traditions of Thai music don't always mesh perfectly with the simpler, more straightforward attack of rock and R&B, that's part of what makes this music so curiously beautiful, as the interplay generates a heat which gives this music its spark. Suitable for world music fans as well as rock & rollers with a sense of adventure, Siamese Soul is a valuable and wildly entertaining bit of musical archaeology that says more about the global phenomenon of pop music than anything Paul Simon has to offer.