The Encyclopedia of Popular Music (PDF) 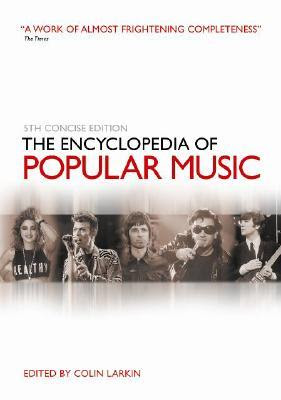 The Encyclopedia of Popular Music was created in 1989 by Colin Larkin. It is the 'modern man's' equivalent of the Grove Dictionary of Music, which Larkin describes in less than flattering terms. Described by The Times as "the standard against which all others must be judged"

Larkin believed that rock music and popular music were at least as significant historically as classical music, and as such, should be given definitive treatment and properly documented. The Encyclopedia of Popular Music is the result. In 1989, Larkin sold his half of the publishing company Scorpion Books to finance his ambition to publish an encyclopedia of popular music. Aided by a team of initially 70 contributors, he set about compiling the data in a pre-internet age, "relying instead on information gleaned from music magazines, individual expertise and a hideous amount of legwork". He financed and founded a new company, Square One Books, to publish the encyclopedia. The first edition of the encyclopedia "pushed Larkin to the brink of bankruptcy". It was a four volume set and went into print in 1992.

In 1995, Microsoft licensed the text for their CD-ROM, Microsoft Music Central, which sold 497,000 copies.

In 1997, Larkin's company, along with the Encyclopedia, was sold to the data company Muze Inc. (the UK name was changed to Muze UK), because Larkin wanted "to guarantee its future" in the fast changing world of information and communications technology. He became full-time editor-in-chief on the project, running a "surprisingly small scale cottage industry", stating "There are now fewer than 10 contributors on the team...People don't believe it's done on such a small scale, but in terms of words we are producing an Agatha Christie novel a month.

"Each biography contains a thorough synopsis of the performer and their body of work, following their career from beginning to end. The 4th Edition is 10,000 pages long in 10 separate volumes with over 8 million words and 27,000 entries. The nature of popular music and jazz is such that it is ever changing, evolving and growing and therefore needs a new edition much more frequently than more static subjects."

Guinness Publishing, Virgin Publishing and Omnibus Press have produced the spin-offs on each subject and Larkin's All Time Top 1000 Albums is produced as a companion volume. The large single volume of the Concise edition of The Encyclopedia of Popular Music is now in its 5th edition.