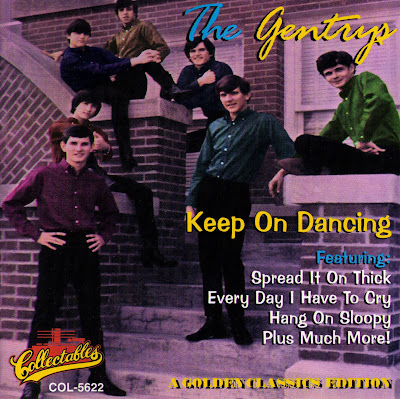 REPOST
The Gentrys got their start in Memphis, TN, in 1963. The original group was made up of seven members: vocalist Bruce Bowles, saxophonist Bobby Fisher, vocalist Jimmy Hart, trumpet player Jimmy Johnson, bassist Pat Neal, vocalist Larry Raspberry, and drummer Larry Wall. Their debut album, Keep on Dancing, climbed into the Top 100 due to the success of the title track.
The group enjoyed minor success until 1966, when the band broke up. Originally, member Jimmy Hart decided to resurrect the band in 1969, now featuring himself on lead vocals. The band still had some minor success, but did not last long. Raspberry would go on to start several more garage and soul groups, while Hart became a popular wrestling character, the "Mouth of the South," and would write music for both the WWF and WCW wrestling organizations.
The Gentrys - Keep On Dancing: 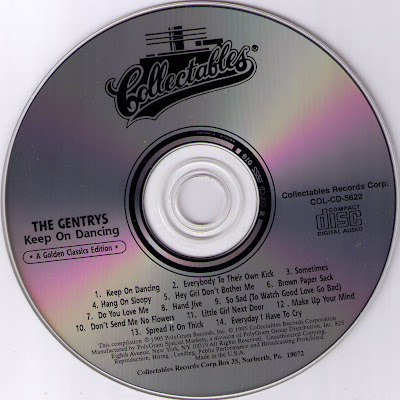 1. Keep On Dancing
2. Everybody To Their Own Kick
3. Sometimes
4. Hang On Sloopy
5. Hey Girl Don't Bother Me
6. Brown Paper Sack
7. Do You Love Me
8. Hand Jive
9. So Sad (To Watch Good Love Go Bad)
10. Don't Send Me No Flowers
11. Little Girl Next Door
12. Make Up Your Mind
13. Bonus Track: Spread It On Thick
14. Bonus Track: Everyday I Have To Cry
The Gentrys didn't take the prize when they competed on The Ted Mack Amateur Hour, but the resulting exposure led to the group's signing with the local Youngstown label. The evergreen "Keep on Dancing," their second single, hit the Top Five in 1965 after MGM picked it up for national distribution. The song was a cover of a 1963 recording by the Avantis and, in the Gentrys' hands, exemplified the stripped-down, three-chord rock & roll of the garage band revolution. Keep on Dancing is a reissue of the group's MGM album of the same name, the first of two long-players they recorded for the label and the only one to chart. The album contains the their big hit, one side of their first Youngtown single ("Sometimes"), and an assortment of ballads and garage band standards such as "Hang on Sloopy," most of which are based on the same basic chord progression. The influence of the British Invasion — particularly early Beatles — is apparent, as are flashes of soft pop vocal harmonies and Byrds-y arpeggiated guitars. Two bonus tracks round up the group's remaining Top 100 hits for MGM: the unvarnished rock & roll of "Spread It on Thick" and a cover of Arthur Alexander's more nuanced "Everyday I Have to Cry."
****
Posted by: D&J на 16:05