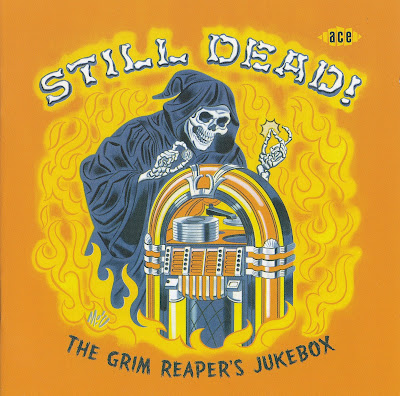 Ace's 2006 compilation Dead! The Grim Reaper's Greatest Hits doesn't automatically seem like the kind of concept that would generate a sequel. But there were certainly enough rock & roll "death" discs in the 1950s and 1960s to fill up a series, and two years later, the label was back with 24 more such novelties from 1952-1969. As theme-concept various-artists rock anthologies go, songs about death certainly rank among the odder and more interesting subjects available, owing both to their morbidity and the sheer difficulty of making a record about death that's both commercial and avoids bad taste. Actually, such discs (including many of the ones assembled for this CD) usually weren't all that successful at doing so, but they're at least amusing to hear for their sheer weirdness, assuming they don't catch you in the wrong frame of mind. There is one out-and-out classic here, the Shangri-Las' "Leader of the Pack," as well as a couple other hits, Thomas Wayne's "Tragedy" and Billy Ward & the Dominoes' ridiculously over the top weeper "The Bells." Otherwise, you're likely to be hearing most of these ditties for the first time, and frankly, quite a few of them aren't all that good, with some exceptions. Little Caesar's "Goodbye Baby" is an incredibly risqué early-'50s R&B murder tune, while the same singer's 1960 rarity "The Ghost of Mary Meade" is an effectively spooky outing. The Whyte Boots' "Nightmare" is well known to girl group collectors as one of the best Shangri-Las imitations, and Vern Stovall's 1961 single "Long Black Limousine" was famously covered by Elvis Presley. Beyond that, it's very uneven sledding, perhaps highlighted, if that's the right word, by the "so bad it's fascinating" 1969 single "The Year 2000" by Estelle (aka Estelle Bennett of the Ronettes), in which she awkwardly details the end of the human race by the end of the millennium. Likewise stretching the boundaries of good taste is an "answer" record to the Everly Brothers' hit "Ebony Eyes," the Beverley Sisters' "Flight 1203," in which it turns out that Miss Ebony Eyes has missed the flight on which everyone else has died. Much of the rest falls into the "fun to hear once or twice" (or less) category, preferably on Halloween, when you need an offbeat selection of seasonal tunes to impress your record-collector friends. But it's good fun, if not exactly clean, with appropriately irreverent detailed liner notes as to the backgrounds of these unlikely deathsploitation records.

1.6 Tragedy - Thomas Wayne with the Delons

1.15 A Thousand Feet Below - Terry Tyler