Various Artists - Gather In The Mushrooms (@320) 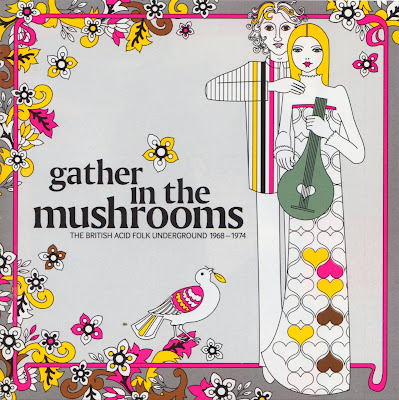 Gather in the Mushrooms: The British Acid Folk Underground 1968-1974 Review by Richie Unterberger.

These 18 tracks give a pretty good idea of the gentler and spacier side of British rock in the late '60s and early '70s, though it's perhaps not as "acid," "folk," or "underground" as the title might portend. It's more an overview of some of the better music from the U.K. scene to fall in the hazy ground twixt contemporary British folk and the milder side of British folk, with just a few heavy rock and psychedelic influences coming into play once in a while. Not all of the performers are "underground," actually, if underground is taken to mean not well known to commercial audiences: the Pentangle, Sandy Denny, and Bert Jansch all sold decent amounts of records to both folk and rock listeners, and while Sallyangie weren't too successful, half of that brother-sister duo (Mike Oldfield) went on to stardom. But certainly, while other artists are fairly well known to British folk-rock cultists (Trader Horne, with ex-Fairport Convention singer Judy Dyble; Forest; Vashti Bunyan; and Shelagh McDonald), names like Magnet, Mr. Brooks, and Fresh Maggots will challenge the memory of both those who were there and those who try to collect this genre retrospectively. The Pentangle's "Lyke Wake Dirge" and Denny's "Milk and Honey" (the latter an early, pre-Fairport Convention recording) are more accomplished and powerful than anything else on the disc. But the rest does offer its share of other fine moments, like Lesley Duncan's self-penned "Love Song" (covered on an early album by Elton John); Bunyan's haunting "Winter Is Blue"; Shelagh McDonald's "Liz's Song," though it's derivative of both Denny and Joni Mitchell; and Comus' disquieting "The Herald," which is about the most psychedelic-influenced track. Most everything else is at least pleasant, making this a good introductory survey if you're gearing up for digging into the more obscure British folk-rock of the period.