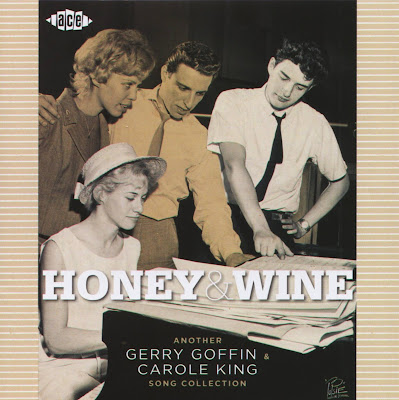 Like the previous Ace compilation A Gerry Goffin & Carole King Song Collection 1961-1967, this CD has 26 vintage recordings of Goffin & King compositions, this one spanning the early '60s to the early '70s. And like its predecessor, it mixes familiar smash hits with rarities and obscure versions of songs that might be more familiar as interpreted by different artists. That guarantees a certain unevenness, but for anyone interested in Goffin & King or the Brill Building in general, it's a very good group of songs overall, illustrating varying facets of the team's songwriting genius. It's true that the big classic hits here -- the Drifters' "Up on the Roof," Maxine Brown's "Oh No, Not My Baby," Gene McDaniels' "Point of No Return," the Monkees' "Pleasant Valley Sunday," and Gene Pitney's "Every Breath That I Take" -- overshadow most of the rest of the tracks. But some of the rarer cuts are almost as good, foremost among them the Hollies' brooding, grooving "Honey & Wine," one of the group's best mid-'60s non-45 efforts; the Myddle Class' sinister "I Happen to Love You," one of the finest '60s garage-pop singles; the Rising Sons' (with Taj Mahal and Ry Cooder) version of "Take a Giant Step," more famous as done by the Monkees; Peter James' "Stage Door" (perhaps more familiar to collectors in the rendition by ex-Searchers member Tony Jackson), which sounds like it might have been a suitable tune for Gene Pitney to do; Chuck Jackson's minor hit soul ballad "I Need You"; and Marianne Faithfull's "Is This What I Get for Loving You," for which Phil Spector (who produced the original version by the Ronettes) also got a songwriting credit. You also get the original version of "Go Away Little Girl," by Bobby Vee (though it took Steve Lawrence to make it a hit), and Jody Miller's little-known cover of one of Goffin & King's strangest compositions, "He Hit Me (And It Felt Like a Kiss)" (originally done by the Crystals). If much of the rest of the CD has an also-ran feeling, it's seldom less than interesting, including Goffin & King songs by notable artists such as Barbara Lewis, Ben E. King, Jan & Dean, Freddie Scott, Nancy Wilson, and the Turtles.