VA - The Answer To Everything Girl Answer Songs of the 60s 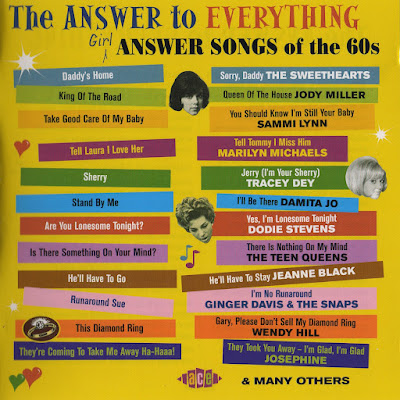 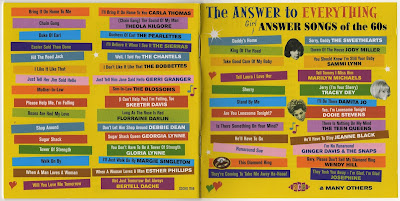 Review by Richie Unterberger
An astounding number of "answer" songs have been recorded in response to big hits in the history of the recording industry, though the phenomenon is more popular at some points than at others. This CD collects no less than 28 such items from 1959-1966, most of them from the early '60s, and all but one (Bertell Dache's "Not Just Tomorrow, But Always") sung by a woman vocalist or female group. As you'd expect, virtually all of these are novelties of sorts, and virtually none of them are in the same class as the songs they're answering. Nor were many of them successful in the marketplace, though a few of them (especially Jody Miller's "Queen of the House," fired off in response to Roger Miller's "King of the Road," and Jeanne Black's "He'll Have to Stay") were actually big hits in their own right, and a few others managed to reach the lower regions of the national charts. All that considered, this is actually more listenable than many skeptics might expect. The production is usually good, the rewrites usually reasonably witty, and the performances usually enthusiastic, even if in their heart of hearts everyone involved knew it was a long shot that these things were going to be smashes. A wide range of styles are on display, from early soul and girl group to country-pop, and just a few of the performances are pretty respectable artistic products only tinged by novelty, like Gerri Granger's "Just Tell Him Jane Said Hello" (the one track on the disc that sounds like it could have been a hit and wasn't) and Esther Phillips' "When a Woman Loves a Man." Many of the big stars of the day get honored (if that's the right word) by forgotten records here, including Ray Charles, the Miracles, the Four Seasons, Dion, Bobby Vee, the Shirelles, Jim Reeves, Gene Chandler, and Sam Cooke. Even the cuts that sound like awful ideas based on their titles -- the Bobbettes' "I Don't Like It Like That" (answering Chris Kenner's "I Like It Like That") and the Teen Queens' grittily bluesy "There Is Nothing on My Mind" (answering Bobby Marchan's "There Is Something on Your Mind") -- aren't at all embarrassing to sit through. Not so, however, for the finale, Josephine's "They Took You Away -- I'm Glad, I'm Glad," the rebuff to Napoleon XIV's loony "They're Coming to Take Me Away Ha-Haa!" 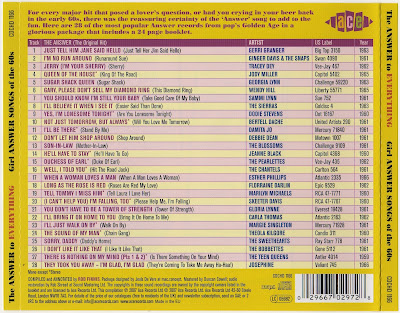