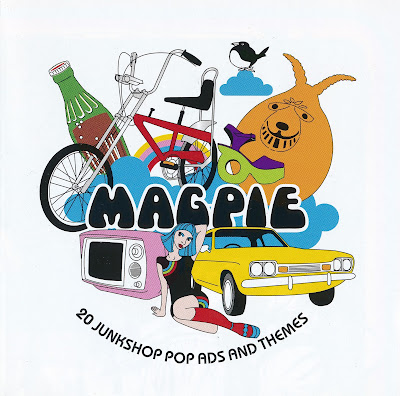 Subtitled "20 Junkshop Pop Ads and Themes," this is a collection whose theme isn't easily grokked by a cursory listen, particularly for listeners outside of the U.K. The basic premise, it emerges, is to collect incidental music from 1970-1974 that sort of formed a backdrop to British pop culture of the era, drawn from TV themes, film soundtracks, ads, and indeed some actual low-budget rock releases. Almost by definition, such common-denominator stuff is much more of nostalgic value than enduring artistic merit. And Magpie is a strange jumble sale of scraps, although some stars actually show up from time to time. CCS's cover of Led Zeppelin's "Whole Lotta Love," for instance, was actually a U.K. Top 20 hit, qualifying for inclusion here on the tenuous grounds of having served as a TV theme on Top of the Pops. You also get to hear Elton John singing "Spirit in Sky," taken from one of the sessions he did around 1970 for low-budget albums with shameless copies of chart records by session musicians. Then there's Don Fardon (who had the first hit version of "Indian Reservation") singing "Belfast Boy" from a documentary on soccer star Georgie Best, Love Affair lead singer Steve Ellis doing a song from the soundtrack of Loot, and TV star Peter Wyngarde providing oily narration for "Neville Thumbercatch." The Murgatroyd Band's theme to Magpie is credible blue-eyed soul-rock, done by the post-Steve Winwood Spencer Davis Group under a pseudonym. Most of this, however, is period TV and soundtrack music that waters down the trends of the day's rock, soul, and easy listening pop for something suitable for background music on the screen, though sometimes in a cool way (whoever's singing the Coke ad sounds a lot like Winwood himself, and Hot Rocks' "Chopper" shamelessly emulates Stevie Wonder's early-'70s keyboard sound). But you probably had to be there, and of a certain age, to get much of a kick out of this particular jaunt down memory lane.