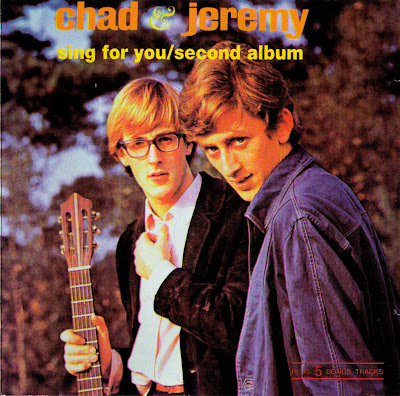 Sing For Yo 1964
Chad & Jeremy's first British LP, Sing for You, was -- confusingly -- an entirely different release than the American LP bearing the same title, which was the second of the duo's U.S. long-players, and featured different tracks for the most part. The U.K. Sing for You was pretty similar to Chad & Jeremy's first American LP (Yesterday's Gone), with the exception of a different running order and a few different tracks. Three songs from the British Sing for You don't appear on Yesterday's Gone: "If I Loved You" (their third British single), the traditional folk song "Donna Donna," and the John Lennon-Paul McCartney composition "From a Window" (never done by the Beatles, but a hit for Billy J. Kramer). Conversely, three songs from Yesterday's Gone -- "Now and Forever," "Too Soon My Love," and the instrumental "Only for the Young" -- don't appear on the British version of Sing for You. It's a pain to keep straight, but luckily it doesn't really matter. Since everything from the British Sing for You (including the aforementioned three songs that don't appear on Yesterday's Gone) all found release in the United States, there's no reason to hunt down an original copy of the U.K. album; if you want to hear the songs in their original order, they're the first dozen tracks on the reissue compilation Sing for You/Second Album, which combines the first two albums and five additional tracks on a single-CD release. As for the music, it was pleasant fare that epitomized the lightest aspects of the early British Invasion, highlighted by their pop-folk hits "Yesterday's Gone," "A Summer Song," and "Willow Weep for Me." Elsewhere the song list is more varied and less rock-oriented than that of the usual British Invasion act, including a few originals, popular standards ("September in the Rain" and Rodgers-Hammerstein's "If I Loved You"), and folk music.
Second Album 1965
Although Chad & Jeremy's Second Album was not released in the U.S., there's not much reason for collectors to sweat out trying to find the LP, as all of its tracks did come out in some form stateside. In fact, Second Album had nearly the same contents as the duo's second American LP (titled Sing for You, and, confusingly, not at all the same as the British LP called Sing for You, which was their first U.K. long-player). The only differences between Second Album and the U.S. Sing for You are that Second Album has a few songs not on the American counterpart, two of which ("Now and Forever" and "Too Soon My Love") had already appeared in the U.S. on the Yesterday's Gone album, the other of which ("It Was a Very Good Year") would soon appear on an American B-side, and subsequently on U.S. album compilations. And naturally, in this transatlantic mishmash, the American Sing for You has two songs which don't appear on Second Album, "Donna Donna" and "From a Window," though they'd already appeared on the British version of Sing for You. The musical merits of Second Album were, naturally, similar to those of the American Sing for You: no big hits, but generally likeable lightweight British Invasion music, though the songs that actually verge on cheery British Invasion rock ("My How the Time Goes By," "Now and Forever," "Too Soon My Love," "Only Those in Love") are far better than the covers of popular standards ("The Girl From Ipanema," "It Was a Very Good Year") and the bossa nova-cum-folk on their cover of Ian & Sylvia's "Four Strong Winds." If you do want to hear everything from Second Album in the original order, try to find the reissue compilation Sing for You/Second Album, which combines the first two albums and five additional tracks on a single-CD release. 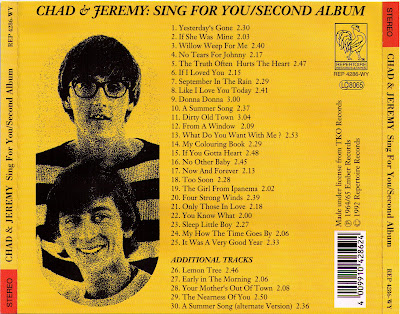