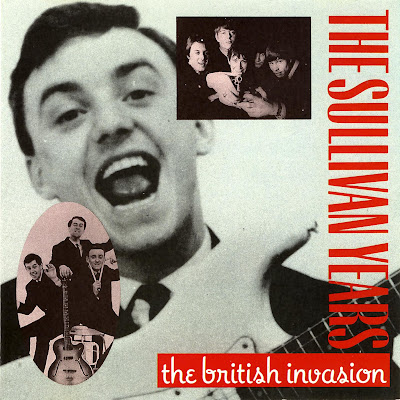 Probably the best of TVT's Sullivan series. Sullivan can actually take a good deal of the credit for breaking the British Invasion in the United States, featuring most of the top bands on his show in the mid-'60s. This compilation has 16 songs from 1964-1966 broadcasts by the Searchers, the Animals, Billy J. Kramer, Peter & Gordon, Gerry & the Pacemakers, Herman's Hermits, and Freddie & the Dreamers. Occasionally, it's obvious that they're singing to a backing track, but most of the performances are totally live and make for a pleasant listen, though they don't match or redefine the studio versions; the Animals come off the best. Presumably, material by the Beatles, Rolling Stones, and the Dave Clark Five -- all of whom played on the show several times -- was unavailable for licensing.VA The British Invasion - The Sullivan Years
01 - From a Window - Billy J. Kramer
02 - Bad to Me - Billy J. Kramer
03 - My Reservation's Been Confirmed - Herman's Hermits
04 - Just a Little Bit Better - Herman's Hermits
05 - Mrs. Brown You've Got a Lovely Daughter - Herman's Hermits
06 - I'm Henry the VIII, I Am - Herman's Hermits
07 - Needles and Pins - The Searchers
08 - Ferry Cross the Mersey - Gerry & The Pacemakers
09 - It's Gonna Be Alright - Gerry & The Pacemakers
10 - Don't Let the Sun Catch You Crying - Gerry & The Pacemakers
11 - I Don't Want to See You Again - Peter & Gordon
12 - I'm Telling You Now - Freddie & The Dreamers
13 - The House of the Rising Sun - The Animals
14 - Don't Bring Me Down - The Animals
15 - Don't Let Me Be Misunderstood - The Animals
16 - We Gotta Get Out of This Place - The Animals
Posted by: D&J на 20:04