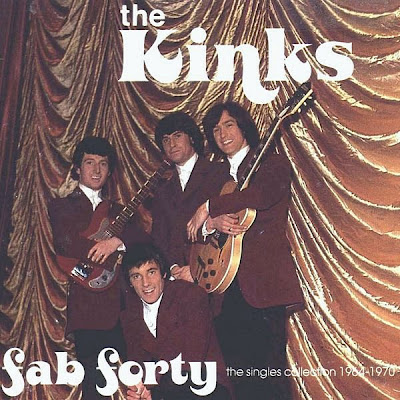 "What makes this Kinks compilation such an essential addition to the group's catalogue," writes Patrick Humphries in his liner notes, "is that for the first time it contains in correct chronological sequence, virtually all the Kinks' singles they recorded for the old Pye label, 1964-1970." Humphries' statement is correct, right down to the key word "virtually," which needs to be explored in greater detail. As its title implies, the two-CD set, which runs over 114 minutes, contains 40 tracks drawn from Kinks singles released during their first seven years of existence, 20 A-sides and 20 B-sides. As such, it is half a greatest-hits album, containing well-known tracks like "You Really Got Me," "All Day and All of the Night," and "Lola," and a half a rarities album containing some of the group's most obscure recordings, and they alternate with each other through the collection. But back to the word "virtually." Given that this is a British compilation, it is not surprising (but still disappointing) that "A Well Respected Man," which reached the Top 20 of the U.S. singles charts, but which was not released as a single in the U.K., is missing. But there is no apparent explanation for the omission of "Dedicated Follower of Fashion," a Top Ten hit in the U.K. Of course, that single's B-side, "Sitting on My Sofa," is also missing, as is the wonderful non-chart 1969 single "Drivin'." And, as a singles collection, the album contains nothing from the album The Kinks Are the Village Green Preservation Society, from which no singles were issued. Only one of the first 33 of the 40 tracks is in stereo, and oddly enough it's the first one, "I Took My Baby Home," which actually was the B-side of the Kinks' debut single, a cover of the Little Richard hit "Long Tall Sally." Starting with "Shangri-La," the last seven tracks are in stereo. Since bandleader Ray Davies was such a good songwriter, there are many excellent compositions among the lesser known tracks here, notably several with lead vocals by guitarist Dave Davies. There are also hints of what was to come after 1970 -- "Act Nice and Gentle" (the B-side of "Waterloo Sunset") and "Plastic Man" (actually a Top 40 hit in Britain) both sound like they could have come from the Kinks' country-rock album Muswell Hillbillies of 1971. But the main joy of the set is hearing the group evolve from its hard rock days with "You Really Got Me" and its soundalikes to more idiosyncratic and sophisticated fare such as "Victoria," even if some key
songs are missing, some for no obvious reason.
Posted by: D&J на 21:19