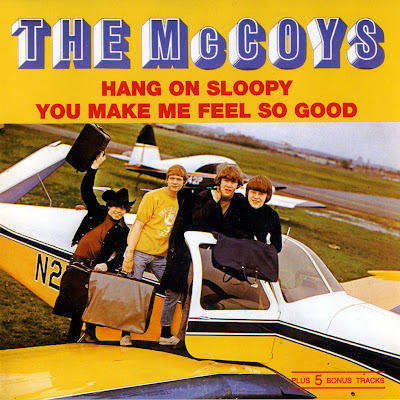 This Indiana group was still in high school when they were tapped by the Strangeloves production team of Feldman-Goldstein-Gottehrer as a vehicle for their material in 1965. Their first effort, "Hang on Sloopy," was a monster number one smash, built around a riff and chorus that ranks with "Louie Louie" and "La Bamba" as a garage band perennial with its compelling, elemental simplicity. Featuring the lead vocals and lead guitar of a young Rick Derringer, they went on to cut a lot of similar chunky, innocuous pop/rock over the next couple years with fair success. The "Hang on Sloopy" sound-alike "Fever" was their only other Top Ten entry, and the Ritchie Valens cover "C'Mon Let's Go" their only other Top 40 hit.

The McCoys recorded very little original material during their early years at Bang Records; most of it was supplied by the Feldman-Goldstein-Gottehrer production team, much of which consisted of unexceptional derivations of the "Hang on Sloopy" prototype. Notable exceptions were the folky "Sorrow," covered for a Top Ten hit by the Merseys in Great Britain (and covered by David Bowie on Pin Ups a decade later), and the adventurous Middle Eastern-tinged garage psychedelia of "Don't Worry Mother," their best cut besides "Hang on Sloopy." The McCoys proved unusually durable after their career as a teen pop band; in the late '60s, they broke from their Bang producers to record psychedelic and progressive rock for Mercury. Most of the group joined Johnny Winter's backup band in the early '70s, and in 1973 Rick Derringer joined the Edgar Winter group as lead guitarist and vocalist, after which he had a successful hard rock solo career. 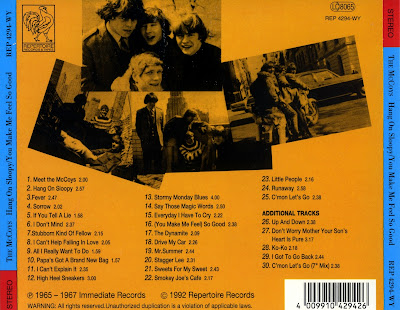 Hang On Sloopy
The McCoys' debut album in 1965 was less a unified collection than it was a classic single, the title tune "Hang on Sloopy," which featured the singing and guitar playing of a young Rick Derringer, surrounded by a lot of likeminded filler, although a couple of the tracks, most notably the relatively ambitious "Don't Worry Mother" and the striking "Sorrow," which sported a lovely melody, rose well above the generic feel of the rest of the album. That's still the case some 40-plus years later.
Posted by: D&J на 01:22