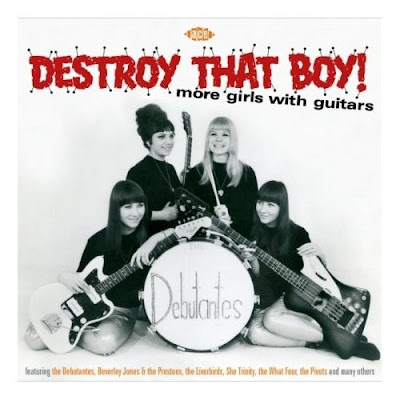 A sequel to the 2004 Ace CD Girls with Guitars, this likewise focuses on guitar-oriented, girl-sung 1960s rock from the '60s, though to be technical one 1970 cut sneaks in. These aren't all self-contained female groups who played their own instruments (although a few of them are); in fact, a number of these artists didn't play their own music, and some of them were solo acts, not bands. The common factor, however, is that all of them did play rougher, more guitar-heavy rock than the norm for woman rockers of the era. There's a fairly narrow pool of discs to choose from when you're making an anthology like this (though not as narrow as many people realize), which makes it hard if not impossible to make an "all killer no filler" compilation. That's how it goes with Destroy That Boy! More Girls with Guitars, which is usually fun, and occasionally very good, but often more interesting for historical oddity and energy than for the quality of the songs or performers. Still, there are some genuinely stand-out tracks here, none more so than Beverley Jones' "Hear You Talking," which is average Merseybeat musically, but has a vocal that's incredibly vicious by 1964 standards, and a chorus ("I'll cut you dead...if I hear you talking about her") that's downright gangsta in this company. Also very good is Sharon Tandy's "Hold On," justly hailed as a first-rate mod rocker long before its appearance on this compilation, and Ann-Margret's unlikely (and mighty strange) psychedelic Lee Hazlewood-written and produced 1968 rarity "You Turned My Head Around." Nothing else on the CD galvanizes like these three items, but it does at least present a wide range, from Merseybeat (including Liverpool's self-contained Liverbirds) and Beatles novelties to She Trinity's "He Fought the Law" (reportedly the inspiration for the Clash's "I Fought the Law" cover, according to the liner notes); a folk-rocker co-written by Erik Darling of the Rooftop Singers (Project X's "Don't You Think It's Fine"); and a rocking Donovan song that Donovan himself never put on his records (Karen Verros' "You Just Gotta Know My Mind"). Also neat is the Girls' previously unreleased "Here I Am in Love Again," with backing by the Beau Brummels, which was written and produced by Sly Stone, even if the vocals are pretty shaky.