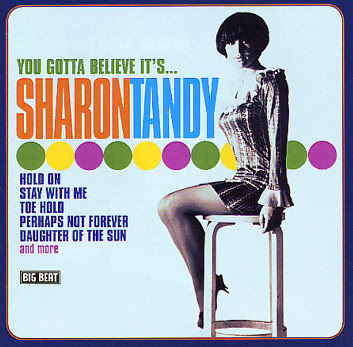 Sharon Tandy (born Sharon Finkelstein; c. 1947) is a South African singer who achieved some success in the United Kingdom in the 1960s as part of the blue-eyed soul and freakbeat movements. In 1966, she recorded some songs at Stax studios, a rarity for a white singer. She also had several chart hits in South Africa in the 1970s. 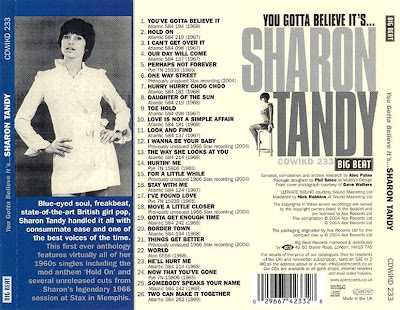 This 26-track compilation is a virtually complete collection of the 1965-1969 material this South African singer cut during her period as a British resident, including 17 songs from her 1966-1969 Atlantic singles (one of them cut as half of the duo of Tony & Tandy); her two 1965 Pye singles; and five previously unreleased tunes she cut at Stax in Memphis in 1966. (Unfortunately her sole Mercury single, from 1966, was unavailable for licensing.) Sharon Tandy was a blue-eyed soul singer rather in the mold of Dusty Springfield, both in terms of her voice and her versatility, blending various shades of soul, British pop, and even some tinges of mod-psychedelia. Her voice wasn't as exceptional as Springfield's, and she didn't record songs that were as memorable, though a couple would have been worthy hits. Nevertheless, this is an enjoyable anthology of a worthwhile if minor performer, hitting its peak on a couple of songs on which she's backed by British mod band Fleur de Lys, "Hold On" (galvanizing soul-freakbeat) and "Daughter of the Sun" (on which she plays the part of something like a psychedelic witch). That's an avenue that, arguably, Tandy should have pursued further, both because she was good at singing harder soul-rock, and because it might have distinguished her from the numerous sub-Springfield women '60s pop/rock-soul singers in the British market. There are some other standout tracks here, though, like the straight Stax-like soul of "I Can't Get Over It"; the gentler, fully produced mid-'60s dramatic orchestrated pop of "Perhaps Not Forever" and "Hurtin' Me"; the sexy dance soul of "Hurry Hurry Choo Choo"; the very Sandie Shaw-like "The Way She Looks at You"; her fine, graceful cover of Lorraine Ellison's soul classic "Stay With Me"; and her cover of the Bee Gees' "World." Stax Records collectors might want to note that Booker T. & the MG's, Isaac Hayes, and the Memphis Horns back Tandy on seven of these tracks (the five 1966 outtakes and the single "I Can't Get Over It"/"Toe Hold"), and that one of those outtakes, "One Way Street," is an Isaac Hayes-David Porter composition that doesn't seem to have been recorded by anyone else. The disc is accompanied by voluminous liner notes, including detailed reminiscing by Tandy herself.
Posted by: D&J на 20:09