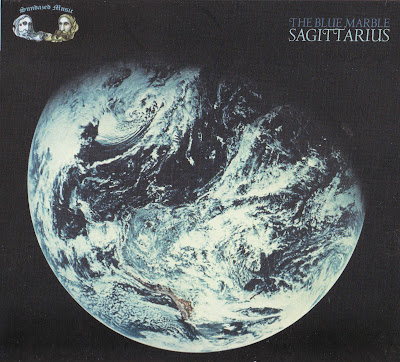 Although it only reached number 70 in the national charts, Sagittarius' 1967 single "My World Fell Down" is one of the great experimental psychedelic pop gems of the era. Sounding very much like a lost Beach Boys classic from the "Good Vibrations"/SMiLE era, the record had beautiful California pop harmonies, exquisite symphonic orchestration, and a downright avant-garde middle section of carnival and bullfight noises. It was perhaps too weird to become the Top 40 smash it deserved to be, but in any case, Sagittarius would have had a difficult time launching a successful career, as the group didn't really exist. It was a studio project of noted producer Gary Usher, who wrote several great Beach Boys songs with Brian Wilson and produced classic albums by the Byrds.
Usher made the recordings that came out under the Sagittarius name in his spare time, with help from such prominent friends as Beach Boy Bruce Johnston and Glen Campbell (who sings lead on the "My World Fell Down" single). The most important of Usher's associates, however, was fellow songwriter/producer/singer Curt Boettcher, who has a cult following of his own for the sunshiny California pop with a touch of psychedelia that he produced during the era, especially as part of the Millennium. Boettcher wrote and sang much of the material that ended up on Sagittarius' 1968 Columbia album, Present Tense. Unlike the "My World Fell Down" single (included on the LP in a brutally edited version), the album wasn't reminiscent of the Beach Boys at their best and most progressive. It was California good-time pop with a mild dab of psychedelia, relentlessly and sometimes annoyingly cheerful, although immaculately crafted and produced, particularly in the layered harmony vocals. Not as commercial as the Association (with whom Boettcher also worked), it still had a lot more in common with the Turtles and the Mamas & the Papas than Pet Sounds or the Byrds. Although it only sold in the neighborhood of 40,000 to 50,000 copies, the record has a cult following, and has been reissued on CD with numerous bonus track
1. In My Room
2. From You Unto Us
3. Will You Ever See Me
4. Gladys
5. I Sing My Song
6. The Blue Marble
7. Lend Me a Smile
8. I Still Can See Your Face
9. I See in You
10. Cloud Talk
11. I Guess the Lord Must Be in New York City (mono)
12. I Still Can See Your Face (mono)
13. In My Room (mono)
14. Navajo Girl (mono)
The shimmering follow-up to Present Tense, 1968’s pop-psych cult classic by producers Gary Usher and Curt Boettcher’s studio-only project Sagittarius (“My World Fell Down”), 1969’s The Blue Marble once again finds Usher crafting still more sunshiney, Beach Boys-esque dreamscapes. As he did for Present Tense, Usher called on the cream of L.A.’s studio pros as well as members of the like-minded Millennium, and the results are once again magnificent.
Layered with creamy vocal harmonies, brass, flute, and Moog synthesizer, The Blue Marble will have fans of the Millennium, the Association, the Yellow Balloon, and similarly grandiose baroque pop acts positively floating on air. Sourced from the original Together Records analog masters, this edition contains four bonus tracks
Posted by: D&J на 22:23