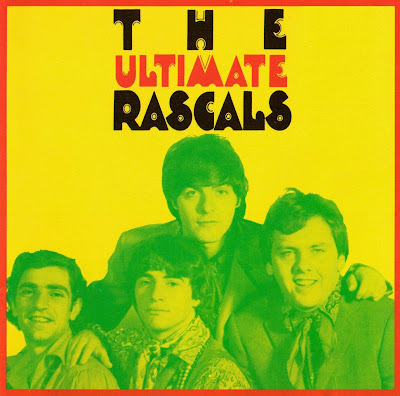 The Rascals, along with the Righteous Brothers, Mitch Ryder, and precious few others, were the pinnacle of '60s blue-eyed soul. The Rascals' talents, however, would have to rate above their rivals, if for nothing else than the simple fact that they, unlike many other blue-eyed soulsters, penned much of their own material. They also proved more adept at changing with the fast-moving times, drawing much of their inspiration from British Invasion bands, psychedelic rock, gospel, and even a bit of jazz and Latin music.
They were at their best on classic singles like "Good Lovin'," "How Can I Be Sure," "Groovin'," and "People Got to Be Free." When they tried to stretch their talents beyond the impositions of the three-minute 45, …Read More
The Ultimate Rascals (1986)

A wonderful collection of songs, most of which were major hits for this quartet, The Ultimate Rascals was one of the early compilations released when compact discs were still fairly young. As such, the tapes from which this recording was mastered were obviously not first generation, with the resulting subpar sound the disc's only weakness. But, oh, the music: a cornucopia for any baby boomer weaned on AM radio in the mid- to late '60s. The Rascals' development is traced here from the early rock & roll sides, like "Good Lovin'" and "You Better Run," through the blue-eyed soul era of "Groovin'" and "A Girl Like You," to the band's social relevance period, exemplified by "People Got to Be Free" and "A Ray of Hope." During their peak period, from 1966-1969, the Rascals cranked out a batch of popular hit singles, and all are here, along with some of their better album cuts. This is the disc that many fans rushed out to buy when they first acquired CD players, and it's still a good place to start for the uninitiated.
For the true fan, however, the two-disc Anthology (1965-1972),
released in the early '90s, is much better.
Track List:
01. I Ain't Gonna Eat Out My Heart Anymore
02. Good Lovin'
03. Mustang Sally
04. You Better Run
05. Come On Up
06. Love Is a Beautiful Thing
07. What Is the Reason
08. Lonely Too Long
09. Groovin'
10. A Girl Like You
11. How Can I Be Sure
12. It's Wonderful
13. A Beautiful Morning
14. People Got To Be Free
15. Heaven
16. See
17. Carry Me Back
18. Find Somebody
19. Easy Rollin'
20. A Ray of Hope
Posted by: D&J на 16:28