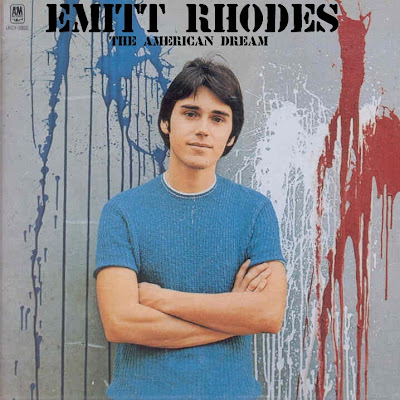 .
Hawthorne, CA, native Emitt Rhodes made his first mark in the music world in 1967 as the leader of the baroque pop band the Merry-Go-Round. The band achieved some marginal success with the Rhodes-penned "Live" and "You're a Very Lovely Woman," recording one album of Magical Mystery Tour-inspired pop. When the band broke up in 1969, Rhodes set up a home studio in his parents' garage and began his solo career, engineering and playing all instruments himself. The strength of his initial demos, now showing a strong Paul McCartney influence, helped him get signed to ABC/Dunhill. His critically acclaimed, self-titled debut managed to break into the Top 40 in 1971, but pressure from his record company forced him to rush-release a follow-up, Mirror, the same year. Mirror was predictably a lesser effort, barely charting. By the time of the third album, 1973's Farewell to Paradise, Rhodes was running into legal problems with ABC, since he was unable to fulfill his contract, which demanded he deliver a new album every six months. Disillusioned, he retired from the performing side of the business, working instead as an engineer and studio operator for Elektra/Asylum. Though he never released an album since Farewell to Paradise, he continued to write and demo new songs.
http://www.emittrhodesmusic.net/emittstory.html
Emitt Rhodes -  American Dream (1971)
Although this album may have been a contractual obligation, there is no doubt that Emitt Rhodes did not take the task of recording American Dream lightly. After disbanding his first group, the Merry-Go-Round, Rhodes still owed A&M Records another album. Several new sessions were held, and along with a few old tracks such as the remarkable "You're a Very Lovely Woman," they make up the body of this fine, if fragmented album. "Mother Earth" is without a doubt one of Rhodes' McCartney-influenced masterpieces, led by a strident 12-string acoustic guitar and a masterful lead vocal. For the first (and possibly only) time in his career, Rhodes utilized session musicians, but he used the very best. Awesome playing from Hal Blaine, Larry Knechtel, Drake Levin, Joel Larson, and others lift this track and others to a level of greatness. This album may be seen as a sort of a warm-up for Rhodes' brilliant, self-recorded Dunhill albums.

1. Emitt Rhodes - Mother Earth (2:29)
2. Emitt Rhodes - Pardon Me (2:46)
3. Emitt Rhodes - Textile Factory (3:05)
4. Emitt Rhodes - Someone Died (2:03)
5. Emitt Rhodes - Come Ride, Come Ride (2:53)
6. Emitt Rhodes - Let's All Sing (2:40)
7. Emitt Rhodes - Holly Park (2:59)
8. Emitt Rhodes - You're A Very Lovely Woman (2:52)
9. Emitt Rhodes - Mary Will You Take My Hand (2:21)
10. Emitt Rhodes - The Man He Was (2:59)
11. Emitt Rhodes - In Days Of Old (2:13)
12. Emitt Rhodes - Til' The Day After (2:39)
The American Dream is released in 1971 and is considered his third album. It is, in fact, his first. All recordings were made in 1967-1968. He recorded some of them with his previous band the Merry Go Round and some solo. Park.
http://en.wikipedia.org/wiki/The_American_Dream_(album)
http://en.wikipedia.org/wiki/Emitt_Rhodes
In 1971 Billboard magazine called him "one of the finest artists on the music scene today" (4/3/71) and later referred to his debut as one of the "best albums of the decade" (11/23/96). Although his brief flirtation with stardom quickly evaporated his music is still considered "essential listening" by '70s rock aficionados and pop fans, particularly his critically acclaimed self-titled magnum opus, which climbed to the top of the charts in the US, and American Dream. Often called "Paul McCartney's musical twin," his influence can definitely be felt here, particularly on songs like "Mother Earth" and "Holly Park." But Emitt was no McCartney copy cat, he was simply a musical genius of the same caliber, exploring pop music in the same direction. Unlike his self-titled debut, which features Rhodes playing and recording every instrument, this features session musicians and a few old tracks from his previous band Merry Go Round, like the fine "You're A Lovely Woman.
Posted by: D&J на 01:52