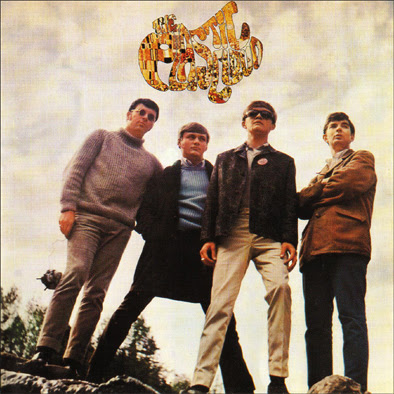 The Plastic Cloud were an Ontario-based folk-rock quartet, consisting of Brian Madill (bass), Don Brewer (lead vocals, 12-string guitar), Mike Cadieux (guitar), and Randy Umphrey (drums). Formed in 1967, they managed to encompass the commercial side of the music in pleasant, Byrds-like original numbers, but also showed a much harder sound dominated by fuzztone guitar and other effects, for a much more spaced-out sound on about half of their recorded material. Madill and Umphrey were the initial partners, with Cadieux and Brewer -- who not only sang lead but wrote all of their original songs -- coming aboard next.

They were signed to Allied Records in Ontario and got one self-titled LP out which, sadly enough, never found an audience, despite beautiful production and some bold, ambitious use of psychedelic effects. Their vocals were pretty and they played better than that, and the results, with a sympathetic producer in charge, were mighty impressive -- their one album is worth hearing a lot more than once, and you get the feeling that if these guys had been working out of, say, L.A. or the Bay Area and been signed to a label with some real marketing power, they'd be a lot more than a footnote today with exactly the music they did leave behind. In 2005, Pacemaker Entertainment reissued their album on CD, and based on the results, Steven Van Zandt or CaveStomp! should be digging these guys up, if they're still around, for a gig as soon as possible. 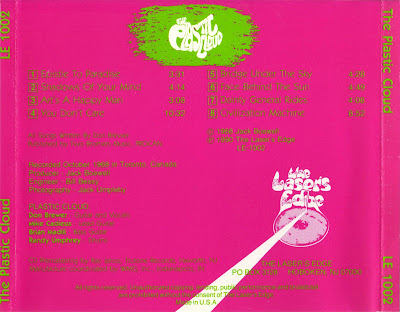 The Plastic Cloud's self-titled album is a strangely compelling and overall delightful mix of West Coast '60s sounds, without any two songs sounding exactly alike, or even displaying the same attributes. Not that any fan of that era will mind any of it, and especially not the Byrds-like harmonies on the opening number, "Epistle to Paradise," which sounds like a more ornate and trippier follow-up to "Renaissance Fair" coupled with "Here Without You." But on "Shadows of Your Mind" the fuzztone guitar cuts in, along withRandy Umphrey's drumming -- which recalls John Densmore's work with the Doors -- for a kind of Buffalo Springfield homage. And "Art's a Happy Man" comes off like a weird-ass amalgam of the early Jefferson Airplane and Spanky & Our Gang. But the ten-minute "You Don't Care" may well bring to mind Big Brother & the Holding Company instrumentally, and the Notorious Byrd Brothers album vocally and psychically. And "Bridge Under the Sky" evokes memories of the Youngbloods. It's all enjoyable and full of pleasant surprises.
Posted by: D&J на 16:18