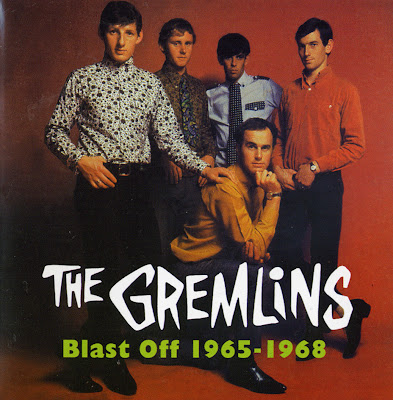 Taken from Faintly Blowing
Like many New Zealand and Australian bands of the mid- to late '60s, the Gremlins were heavily influenced by both British and American rock, pop, and soul music, to the point where they seemed more like versatile all-around talents than musicians who had developed a style of their own. Merseybeat, mod, light psychedelia, soul, surf, pop, and more could all be heard in the nearly two-dozen tracks they released between 1965 and 1968, as well as some specific nods to the Kinks, Bee Gees, and Troggs. Of the groups of this kind that managed to release a fair number of records, however, the Gremlins were above average, both because of their formidable vocal and instrumental skills and their ability to write most of their material (usually courtesy of singer/guitarist Glyn Tucker). However, only one of their singles — a cover of the Knickerbockers' "The Coming Generation" that was more forceful than the original — was a big hit, reaching number two in the national New Zealand charts in September 1966. All of their recordings were issued on the 2005 CD compilation The Coming Generation: The Complete Recordings 1965-68. 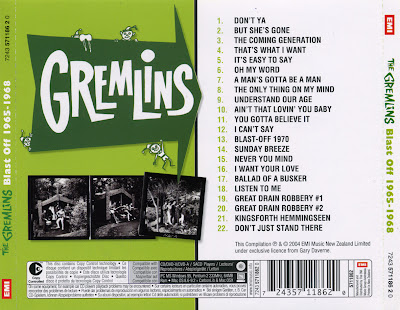 All 19 songs from the Gremlins' 1965-68 singles are on Coming Generation: The Complete Recordings 1965-1968, along with all four tracks from a 1966 EP. It's the work of a pleasant, very accomplished band, albeit one that, like many outfits from New Zealand and Australia, were emulating various British and American trends of the era more than they were forging a path of their own. Nonetheless, it does have a leg up on the '60s output of many other bands from their part of their world in featuring largely original material (mostly written by singer-guitarist Glyn "Conway" Tucker), rather than faithful covers of songs originating in other countries. There's effects-laden pop-psychedelia ("Blast Off 1970"), decent Merseybeat-soaked pseudo-British Invasion sounds ("I Can't Say," "But She's Gone," "It's Easy to Say"), chunky mod rock ("Never You Mind"), sullen folk-rock ("A Man's Gotta Be a Man," "Understand Our Age"), observational pop in the spirit of the mid-'60s Kinks and early Bee Gees, and even a Troggs imitation ("You Gotta Believe It"). For all that, the best song is their big 1966 New Zealand hit "The Coming Generation," a cover of an obscure Knickerbockers song that was actually an improvement on the original. Lengthy liner notes with many quotes from Tucker also help make this a definitive retrospective of this obscure (at least to non-New Zealanders) band.
Thanks F.B.
Posted by: D&J на 22:01