One of the most commercially successful US pop groups of the mid-60s, the original Playboys comprised Gary Lewis (b. Gary Levitch, 31 July 1946, Manhattan, New York City, New York, USA; vocals/drums), Alan Ramsey (b. 27 July 1943, New Jersey, USA; guitar), John West (b. 31 July 1939, Unrichville, Ohio, USA; guitar), David Costell (b. 15 March 1944, Pittsburgh, Pennsylvania, USA; bass) and David Walker (b. 12 May 1943, Montgomery, Alabama, USA; keyboards). Group leader Gary Lewis was the son of comedian Jerry Lewis and had been playing drums since the age of 14. After appearing at selected Hollywood parties, the ensemble was offered a residency at the Disneyland Park and soon after was signed by Liberty Records and producer Leon Russell. Their debut single, ‘This Diamond Ring’ (co-written by Al Kooper and originally intended for former idol, Bobby Vee), topped the American charts in February 1965 and spearheaded an remarkable run of Top 10 hits that included ‘Count Me In’, ‘Save Your Heart For Me’, ‘Everybody Loves A Clown’, ‘She’s Just My Style’, ‘She’s Gonna Miss Her’ and ‘Green Grass’. The latter, although written by UK composers Cook And Greenaway (alias David And Jonathan), predictably failed to make any impact in the UK market where the group remained virtually unknown.
Undoubtedly the bestselling US group of the mid-60s without a UK hit to their name, they nevertheless enjoyed healthy record sales all over the world, appeared regularly on television, and even participated in a couple of low-budget movies, A Swingin’ Summer and Out Of Sight. Their relative decline in 1967 probably had less to do with changing musical fashions than the induction of Gary Lewis to the US Armed Forces. By the time of his discharge in 1968, a set of Playboys were ready to return him to the charts with a remake of Brian Hyland’s ‘Sealed With A Kiss’. A revival of the Cascades’ ‘Rhythm Of The Rain’ pointed to the fact that the group was running short of ideas while also indicating their future on the revivalist circuit. After disbanding the group at the end of the 60s, Lewis was unsuccessfully relaunched as a singer-songwriter but later assembled a new version of the Playboys for cabaret and festival dates. 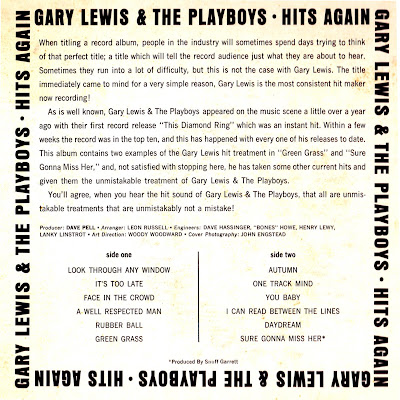