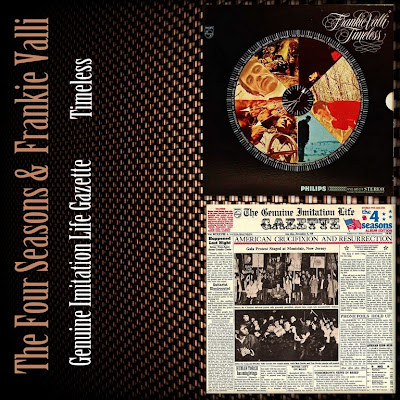 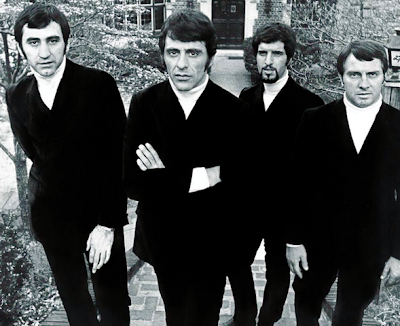 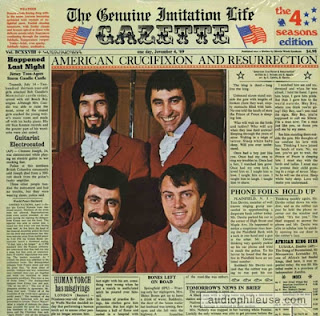 This wildly ambitious opus lives up to its reputation as the most bizarre album in the Four Seasons' catalog. With the help of young songwriter Jake Holmes, the straightest of pop groups went psychedelic to create a concept album that casts a satirical eye on American life. The end result is often excessive both lyrically and sonically, but it's also relentlessly inventive, skillfully constructed, and never dull. Genuine Imitation Life Gazette never feels like a cheap cash-in because the group chases its cosmic muse without any worry of pandering to commercial concerns. In fact, fans of concise Four Seasons pop classics like "Dawn" and "Big Girls Don't Cry" will be shocked by songs like "American Crucifixion Resurrection" and "Soul of a Woman," both multi-minute epics that abandon tight pop song structure in favor of symphonic structures spiked with all manner of psychedelic sonic trickery and elliptical, satirical lyrics reminiscent of Van Dyke Parks' late-'60s work. The best of these epics is "Genuine Imitation Life," a critique of artificial pleasures in modern life set to a psychedelicized lounge backing that remains surprisingly sharp by modern standards. These moments are interspersed with shorter songs that combine sharp lyrics with lysergic but catchy melodies: highlights include "Mrs. Stately's Garden," a jazzy, up-tempo pop track with society send-up lyrics worthy of Ray Davies, and "Saturday's Father," a haunting ballad that underscores its tale of a divorced father visiting his kids with a ghostly tapestry of vocal and keyboard textures. Despite all these musical flights of fancy, Genuine Imitation Life Gazette retains a stylistic consistency throughout thanks to the group's stellar vocals. Valli delivers some of his finest leads on songs like "Genuine Imitation Life" and "Saturday's Father" and the rest of the group provides lush, flawless harmonies that match the varying moods of each song. The end result is an album that, while not for all tastes, offers a stunning example of the artistry of the Four Seasons at their most ambitious.
****
Frankie Valli
Pop singer Frankie Valli was permanently associated with the group for which he served as lead singer, the Four Seasons. But he also maintained a separate solo career during much of the band's tenure that included several major hits beginning with "Can't Take My Eyes Off You" and including "Grease." He also found work as a film and television actor. In general, Valli's solo recordings were closer to middle-of-the-road traditional pop than his work with the Four Seasons, and he abandoned his trademark falsetto when working under his own name alone. To a large extent, however, his name was interchangeable with that of the group, which was billed often as "Frankie Valli & the Four Seasons." .... more :
Frankie Valli - Timeless (1068)
(LP Philips) 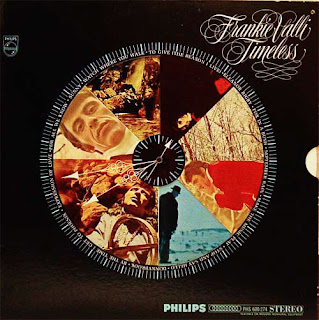 Frankie Valli's Timeless is a superb adult contemporary recording with stellar arrangements, great song selection, and Valli's distinctive vocal sound. It came after two minor solo hits in 1966 and 1967, "(You're Gonna) Hurt Yourself" and "I Make a Fool of Myself," as well as 1967's Top Five smash "Can't Take My Eyes Off You," none included here. "To Give (The Reason I Live)" from this album, did hit the Top 30 in 1968, but it is far from the best track on the record, being an overstated Bob Crewe/Bob Gaudio original flavored by "The Impossible Dream." The cover of Jimmy Webb's "By the Time I Get to Phoenix" is a nice reading, and no doubt appealed to housewives who liked Glen Campbell's original and Valli's voice. While Tom Jones and Engelbert Humperdinck were approaching this market with more bright uptempo pop, Valli took a more mellow route, performing that lively style with his group, The Four Seasons, whose only appearance here is in a photo (including Valli with Joe Long, Tommy DeVito, and Bob Gaudio, looking down at the solo Valli from a balcony. One of the album's highlights is a big production of Bobby Hebb's "Sunny," Hebb's original also on the Philips label. Valli changes the words a bit "wonderful and great are simple joys...ooh Sunny, you separate the men from little boys/your love was given/from an open hand/as nature intended from woman to man/way down to Earth with you, Sunny I love you." Outside of the last four words, it is highly unlikely the song ever included those other lyrics, it having been written for God or for Hebb's brother, the late Hal Hebb of the Marigolds. "Eleanor Rigby" is interesting, an amalgam of Andy Williams and the Bob Crewe Generation's "Music to Watch Girls By" sound, clearly part of Bob Crewe's formula -- here he has Valli singing like Andy Williams and reconstructing the Beatles to his own style of pop. The great Charles Calello conducts most of the arrangements, under Gaudio's supervision, but there are no Four Seasons harmonies here whatsoever, making it a total solo project, with Valli's voice way out in the mix. Artie Schroeck does the only non-Calello arrangement, and that is of the Neil Sedaka / Carole Bayer Sager composition, "Make the Music Play." It is very middle of the road '60s pop, kind of like her Mindbenders hit of 1966 drifting into Tony Bennett territory. Artie Schroeck wrote "Stop and Say Hello" here, and it is second to "Sunny" as the top song on this superb outing. "Stop and Say Hello" is really moving, and should have been the hit. It's another big production with something rare to this album -- backing vocals -- very faint in the background. G. Knight's "Donnybrook" ends the album on a nice mellow note. The band and strings brimming with some delightful and uplifting phrases to bring the program to a close. The cover photos by Bob Golden are included on a wheel which you can turn by hand, an expensive and elaborate package for an important artist from the '60s.
Posted by: D&J на 19:58