THE MAJORS - Meet The Majors : A Golden Classics edition 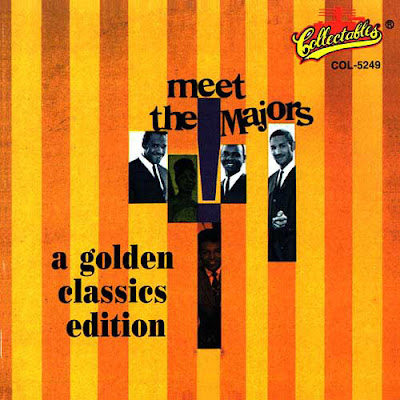 Formed in Philadelphia, Pennsylvania, USA, in 1959, the Majors were an R&B quintet who crossed over to the US pop charts three times in 1962, most notably with their debut, "A Wonderful Dream". The group consisted of lead singer Rick Cordo, Ron Gathers, Gene Glass, Idella Morris and Frank Troutt; their recordings were produced by the influential Jerry Ragovoy - "A Wonderful Dream" was his first Top 40 success. The Majors had their roots in a harmony group called the Premiers. Upon recording their first single, "Lundee Dundee", for Rocal Records in 1960, they changed their name to the Versatiles. The next time the group entered the studio was in 1962 for the Ragovoy-produced tracks for Imperial Records. During 1963, they recorded eight singles for the label, as well as one album. The group resurfaced with a single on ABC-Paramount in 1966, under the name the Performers. They toured throughout the 60s but split by the end of that decade.
1. A Wonderful Dream
2. Time Will Tell
3. She's A Troublemaker
4. Don't You Lose Your Cool
5. A Little Bit Now (A Little Bit Later)
6. Ooh Wee Baby
7. I Wonder Who's Dancing With Her Now
8. Come On, Come On
9. Anything You Can Do (I Can Do Better)
10. Tra La La
The Majors formed in 1961, but one would never know that from this record, which sounds straight out of the '50s. The nine anemic, thankfully brief tracks feature horrendous falsetto lead vocals. Producer Jerry Ragovoy went on to produce some fine sides for Garnett Mims and others, but missed the boat this time.
Posted by: D&J на 03:37