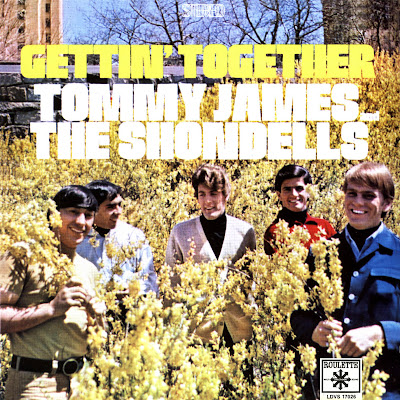 GETTIN' TOGETHER  1967 - Roulette Records
It was June of '67, the "Summer Of Love" - exactly one year since Tommy James and The Shondells burst onto the music scene - and what a year it was!! Voted Billboard Magazine's "Top Male Artists of 1967," their record sales and Top 40 radio success exceeded all expectations.
"Gettin' Together", the group's seventh back-to-back gold single, was zooming into the top 20 as the GETTIN' TOGETHER album was being released - even though it closely followed the wildly successful "I THINK WE'RE ALONE NOW" LP, musically, it couldn't have been more different.
Hauntingly beautiful melodies & lush arrangements, mixed with subtle humor, revealed a whole new side of Tommy James & The Shondells and gave this album a unique and memorable flavor that represented the best of this pre - "Sgt. Pepper" 4-track era.
Note: Fans will recall "Real Girl" ( The B-side of "Gettin' Together" ) became the national theme song for "Real Girl Cosmetics" radio & TV commercials - 1967 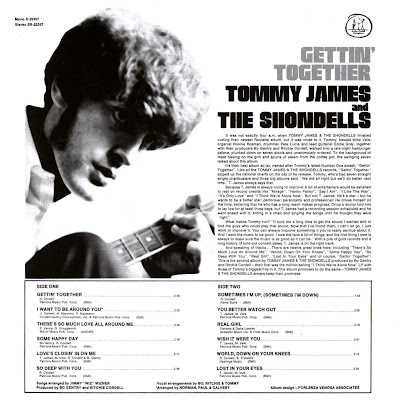 The title track to the Tommy James & the Shondells album Gettin' Together -- resplendent in its Spencer Davis Group-meets-Every Mother's Son flavors -- reached the Top 20 in September of 1967, the fourth chart song for the group that year. Ritchie Cordell and Bo Gentry follow up the I Think We're Alone Now project with light pop material initiated on "It's Only Love," the hit from the Shondells' second effort, only this time around with a bit more maturity to it, not to mention riffs culled from the Top 40 of 1966 and 1967 radio. There's nothing here on the level of "Mirage" or "Mony Mony," but the album still has merit. Songwriter G. Illingsworth brings one co-write, a very '60s-sounding "There's So Much Love All Around Me" -- he would return with three more collaborations on Mony Mony listed as G. Illingworth. The pretty "Real Girl" by Darlene and Darla Landen also fits in very well with its surroundings. Ritchie Cordell writes or has a hand in half of the 12 songs, and boy are they compact -- "Some Happy Day" clocks in at two minutes and 16 seconds, the interesting Cordell solo piece "Sometimes I'm Up, (Sometimes I'm Down)" clocks in at under two minutes at one minute and 55 seconds, and the Tommy James/Mike Vale composition "Wish It Were You" (one of four titles the singer and bassist helped put together) is a mere two minutes and one second long. The duo's "You Better Watch Out" lifts liberally from the Yardbirds' summer of 1966 hit "Over, Under, Sideways, Down" and gives a hint as to where the band was heading creatively -- not to mention which groups were truly influencing the Shondells' music. Despite the quintet's growth, this album and that which followed, Mony Mony, were teen-oriented bordering on bubblegum, though "Some Happy Day" here does have the experimentation started by "Mirage" and is one of the more clever pieces. "Love's Closin' in on Me" is an up-tempo and fun excursion by producers Gentry and Cordell along with Tommy James and Mike Vale. Short and sweet confection is the rule coloring the third of four albums with Ritchie Cordell's participation. On their own a little over a year later, James and the boys would write, arrange, and produce the classic "Crimson & Clover" 45 rpm and long-player with only one outside song, "Do Something to Me," by the songwriters who wrote the second track on this LP, Calvert, Marzano, and Naumann. The creative sparks on Gettin' Together are a good study in the evolution of a pop star as well as a unique look at '60s record production. It's a listenable and important piece to the Shondells' puzzle. ~ by Joe Viglione