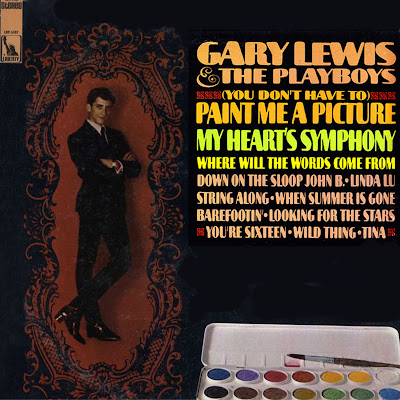 (You Don't Have To) Paint Me a Picture yielded two Top 20 hits and one Top 25 chart-climber, but "My Heart's Symphony," along with the title track, and what would be the weakest of his first ten Top 40 songs, "Where Will the Words Come From," all deserved to be the first three of his chart singles not to enter the Top Ten, the majesty of "Green Grass" and "Count Me In" just missing from this work. Maybe the production team gathered by Snuff Garrett was just running out of creative ideas for the son of a movie star. Leon Russell and Glen D. Hardin arranged "My Heart's Symphony" and "Where Will the Words Come From," one of two other co-writes by Glen D. Hardin, and, despite their shortcomings, they work better than covers of "Barefootin'," "You're Sixteen," and a totally disposable version of Chip Taylor's "Wild Thing." Sure it can be easy to get lax when Top Ten success is yours seven times in over 17 months, but even Lewis' campy voice didn't have the aura of a Nancy Sinatra, or her appeal, though a duet with the two Hollywood showbiz kids would have been really nice. Nancy Sinatra was just taking off at this point, and maybe Dean Martin, who would eventually duet with her, had something to say about it all? Coming on the heels of Golden Greats, a compilation of the first seven hits and five additional tracks, this project feels a bit rushed. But with all the resources at their disposal, something more exciting could have been found than the watered-down Beatles "Till There Was You" that is "Tina (I Held You in My Arms)," or the Playboys emulating the Beach Boys on the adequate "Sloop John B," charting for Brian Wilson's young men just as "Sure Gonna Miss Her" was cruising through the Top 40. Is it John Wayne and other motion picture icons on "Looking for the Stars"? Probably not, and the singer waking up from his dream to find out that it is HE who is as big as the celluloid heroes, well, it's a stretch. The three hits aren't bad, they just aren't as magical as the first wave, and even Charles Koppelman, Don Rubin, and Gary Klein taking the reigns from Snuff Garrett couldn't revive the fantastic original formula. Their Nick DeCaro-arranged "Girls in Love" five months after this album's last song was fading from the radio only nicked the bottom of the Top 40. It was the weakest of his dozen AM songs. The cover photo is very clever, though, a photo of a sharp-dressed Gary Lewis in a portrait with paint box and brush beneath him. It's fun '60s pop with some additional nuggets, like a dreamy little "When Summer's Gone." There was just no need for all the filler -- the powers at play here certainly could have made this effort better with a bit more elbow grease.
01 - My Heart's Symphony
02 - Barefootin'
03 - Down On The Sloop John B
04 - Tina (I Held You In My Arms)
05 - String Along
06 - (You Dont Hove To) Paint Me A Picture
07 - Where Will The Words Come From
08 - You're Sixteen
09 - When Summer Is Gone
10 - Linda Lu
11 - Looking For The Stars
12 - Wild Thing
Posted by: D&J на 21:56