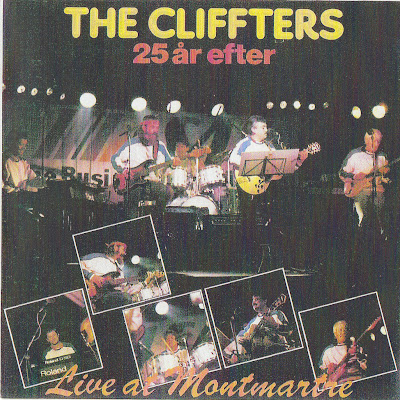 B E A T  I N S T R U M E N T A L
D E N M A R K
THE CLIFFTERS story started way back in 1960, only a few years before the Mersey Sound took the rest of Europe by storm. At this time, Cliff Richard and The Shadows were the best group that one could listen or dance to. The Cliffters made their sound very close to Cliff & The Shads, indeed their name seems to have been inspired by Cliff !
Django started it all. It was a self-penned tune by lead guitarist Mogens Petersen, who later took 'Django' as a nickname and continued using it as his professional name when making solo records up until he passed away in 1991.
Before Django, they made two vocal records, but it was this third single which was to be issued in Holland, Sweden, Norway, England and even in Japan where it was very popular.
Mogens picked this title from a western film of the same name and not from Django Reinhardt as has been written previously.Home             latest news            instro jukebox             legacy sounds uk             brit instros             euro instros             american instros             instro linksby Ole VinterThrough the years 1961-64, The Cliffters made 11 singles for Philips Records in Denmark and they toured the country several times where they just about had a monoply of this kind of music. They started everything in Denmark with their mixture of instrumentals and vocals.
It seems funny to say now but all their records were made in a cinema with no overdubs. The studio was the cellar of the Islev Bio Cinema where they recorded when people left after the last show. Philips had no recording studio of their own at that time.
Founder members of the group were vocalist Johnny Reimar, Mogens 'django' Petersen (lead), Lars Kofoed (bass), Ole Rasmussen (piano & keyboards) and Jan Petersen (drums). This was the lineup from 1960 to 1963 - and the best one !
Django was covered by many other groups all over the world e.g. The Quivers from Norway, Les Fantomes from France and Terry & The Bluejeans from Japan. The rest of their singles however, were not as successful although the vocal Twistin' Patricia did hit the charts for them.The original lineup disbanded in 1963 when Johnny Reimar and Jan Petersen left to form another vocal/instrumental group, The Scarlets who went on to make many fine records, but that's another story.
The two new members were Bjarne 'de la 'Motte on rhythm guitar and Torben Sardorf on drums and this was the lineup for the last chapter of the group.
They toured Finland for some weeks in 1964 with this formation but they broke up later in the year after two unsuccessful singles.
Mogens joined rock & roll band Melvis from 1964 - 66 and Motte and Sardorf formed The Hitmakers.
The original band did however get together for some rock gigs in the late '60s and they were the support band for Bill Haley in 1968 at his concert in Copenhagen.
Mogens became a producer and studio musician, Jan Petersen a photographer and Johnny Reimer is the owner of Starbox Records in Copenhagen although he does still sing as a soloist.
http://www.instrumentalreview.com/instreviewcliffters.html 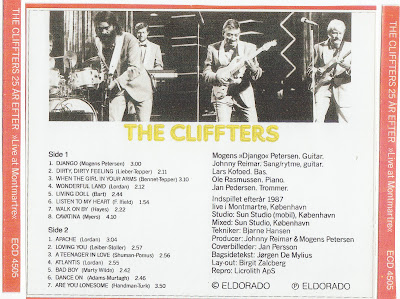