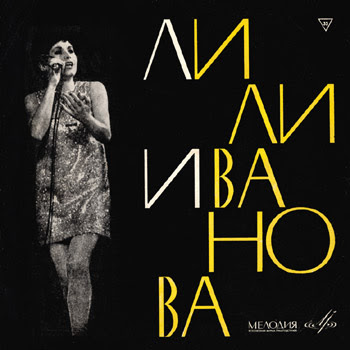 http://en.wikipedia.org/wiki/Lili_Ivanova
http://goo.gl/1E17I
Lili Ivanova has released 35 albums in Bulgaria, USSR, Romania, Turkey, Germany, Spain and other countries. There aren't exact statistics on the number of sold copies of her albums. According to Yosifov Alexander, ex-director of Balkanton from 1968 to 1986, Lili Ivanova's albums in store for the Soviet Union always reached a circulation of over 1 million. The Italian Magazine L'Europeo stated that she has sold more than 10 million copies in the USSR.
Lili Ivanova performs in many languages, including Russian, English, German, French, Turkish, Spanish, Italian and Hebrew.
Lili Ivanova has had many tours abroad, mainly in the former USSR (and Russia in the 90s). She has had successful concerts in Germany, Cuba, Japan, Turkey, the Czech Republic, Yugoslavia, Hungary, Poland, Greece, Portugal, Brazil, etc. as well as several tours in the US and Canada singing for Bulgarian immigrants there
01.More Molodosti
02. Trdnyj tanets
03.Venera
04.Bez radio ne mogu
05. Ty
06.Bespokoynoe serdtse
07.Benk-benk
08.Pust' govoryat
09.Osen' i more